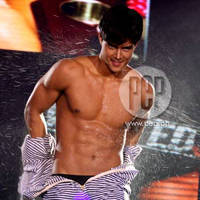 Attention ladies (and gents): Brazilian-Japanese model Daniel Matsunaga is now on the market. His girlfriend, also a Brazilian model, is going back to their homeland to help with the family business and continue her modeling career, while he has chosen to remain in Manila for his showbiz career, reports PEP.ph. The couple didn't have a formal breakup but PEP.ph referred to the girl as his ex-girlfriend.

"We still like each other but then she has to leave… I don't think [she's coming back]," Matsunaga said.

Asked if he would visit her in Brazil, Matsunaga said, "[Yes], no problem... maybe."

Upon PEP.ph's prodding, Matsunaga rattled off the prettiest faces in showbiz for him: Marian Rivera, Kris Bernal, KC Concepcion and Rhian Ramos. "It's very hard to choose who is the most beautiful."

Matsunaga insisted that he's straight. "No, no, I like girls, I really like girls! I have nothing bad to say about gays. In the modeling world, there are a lot of gays, and they're nice and funny." He also insisted that his friend of six years, fellow Brapanese model Akihiro Sato, is straight despite the rumors. "I know that he is a guy and he likes girls also."

When PEP.ph told him his co-star in the The Last Prince, Aljur Abrenica, said Matsunaga is more handsome than he is, Matsunaga was quick to say, "I don't think so! He is very good and very handsome."

Photo by Noel Orsal of PEP.ph.

Marian Rivera Kc Concepcion Akihiro Sato Aljur Abrenica Kris Bernal Rhian Ramos Daniel Matsunaga
Your Guide to Thriving in This Strange New World
Staying
In? What to watch, what to eat, and where to shop from home
OR
Heading
Out? What you need to know to stay safe when heading out