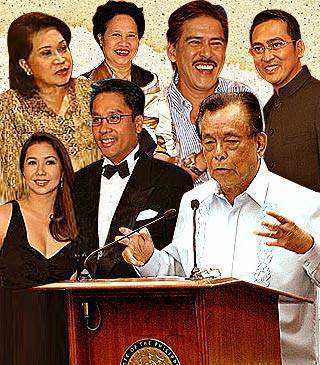 We expect Pinoy politics to be a dirty game. Here's a list of notorious politicians who have met our expectations in very interesting ways.

We all expect Philippine politics to be a dirty game. But there are politicians who exceed our expectations. SPOT.ph lists some of the most cringe-inducing moments in Pinoy politics.

Nene Pimentel lets his mouth get the better of him.

1. SENATOR AQUILINO "NENE" PIMENTEL JR. GETS DOWN AND DIRTY WITH HIS "INSERTION" AT THE SENATE. Diarrhea of the mouth must have struck Senate Minority Leader Aquilino "Nene" Pimentel Jr. on January 25, 2010. In an ethics committee hearing on the alleged financial allocation insertion made by Senator Manuel "Manny" Villar, Senator Manuel "Mar" Roxas II clarified that he himself did not engage in such a practice. "I say no," he said. "I had no insertion on any matter. In fact, I have no insertion, period. Because we're in the minority! Let alone an insertion for a road to pass through any such property." To which, Pimentel quipped: "Well, well, I am sure that after your marriage, you had some insertions. But that may be different." The comment prompted laughter from the gallery, but it was clearly in bad taste. "That is an affront on my wife (Korina Sanchez), Mr. President!" Roxas exclaimed. The following day, Pimental apologized for his "coarse and vulgar" words. "To those who I might have hurt in this Chamber by the use of intemperate language or unseemly expressions, I apologize and beg their forgiveness through you, Lord," he said.

The Eraserheads rock on with their controversial tune.

2. SENATOR VICENTE "TITO" SOTTO III GOES AFTER THE ERASERHEADS. In August 1995, Senate assistant majority leader Sotto decided he had to get busy. It was his mission to save all the Filipino youth from drugs and all forms of vices. Thus, he called for a ban on the airplay and sales of "Alapaap" by the Eraserheads. Other bands included in the so-called audio crackdown were Teeth for "Laklak" and Yano for "Iskolar ng Bayan." The E-heads–Ely Buendia, Marcus Adoro, Buddy Zabala, and Raymund Marasigan–had to write a letter to Sotto. There, they stated, "We are saddened by the fact that this song, 'Alapaap,' which the band considers to be our 'ode to freedom' as artists in our society, was dubbed as an 'ode to drug abuse,' by the Junior Drug Watchers." It is no longer clear what Sotto's point was.

It looks like Mikey Arroyo can't wait to leave.

3. MIKEY ARROYO GETS SKINNED ALIVE BY WINNIE MONSOD. The congressman, who is the eldest son of President Gloria Macapagal Arroyo, probably thought that the hardest thing about his September 1, 2009 Unang Hirit appearance would be waking up early. He was dead wrong. He soon found himself in a battle of wits with feisty host Winnie Monsod. He was obviously unarmed. Arroyo had a "WTF am I doing here?" look as Monsod asked him how he accumulated all his wealth despite his meager salary as a government employee. He tried to dodge Monsod's questions but, in the end, she told him: "You know what, the law is very clear. If there is a problem, when there is a question of unexplained wealth here, the burden of proof is with you, with the government employee."

Who would've thought that this cute matinee idol would be such a hotheaded lawmaker?

4. CONGRESSMAN JOSE MARI GONZALEZ LETS IT RIP DURING AN IMPEACHMENT HEARING. If you can't handle the heat, you're supposed to get out of the kitchen. But San Juan Representative Gonzalez, an ex-matinee idol, just let it rip. During the proceedings of the impeachment of then-president Estrada, Gonzalez slapped House Sargeant.-at-Arms chief, retired Gen. Bayani Fabic, right after House Speaker Manuel Villar Jr. endorsed to the Senate the Articles of Impeachment. Though he apologized, his colleagues still deemed his conduct reprehensible.

Behind every leader may very well be a load of dirt.

5. THE FERDINAND MARCOS AUDIO SEX TAPE SCANDAL. In 1969, a movie called Maharlika, which was supposed to be a take on the war exploits of Marcos, began shooting in the Philippines. The hero's love interest was played by an actress named Dovie Beams. Though Marcos was married to one of the most beautiful women in the country, his eye allegedly wandered. Soon enough, Beams was letting everyone hear her so-called recorded encounters with Marcos. He was said to have sung the Ilocano folk song "Pamulinawen" to her during their…er…dates.

Do they expect us to get hungry after this scene?

6. MARK LAPID FINALLY GETS SOME FRUITY ATTENTION. Before this video clip went viral, Lapid's claim to fame were mostly secondhand. He was the son of action star-turned-senator Lito and he was Kris Aquino's ex. Then, in 2006, he made a movie called Apoy sa Dibdib ng Samar. His pang-FAMAS Award moment was a spiel about bananas. You have to watch it to believe it. Yes, these are the kind of clowns we elect as our leaders.

Miriam seems to be in her element when she's mad as hell.

7. SENATOR MIRIAM DEFENSOR SANTIAGO THROWS OUT TWO WOMEN. In 2009, Santiago gave a privilege speech lambasting government officials for their infomercials. Also present at the gallery were two women whose antics were not to her liking. She called them out and had them escorted out of the Senate. Santiago is already a formidable presence even when she doesn't say a word. But it's a different matter entirely when something or someone gets her goat.

There are times when it's not cool to be called "Dancing Queen."

8. SENATOR TESSIE AQUINO ORETA SHOWS OFF HER PRO-ERAP SENTIMENTS BY DANCING. During the impeachment trial against President Joseph "Erap" Estrada in 2001. She was one of the pro-Erap senators who voted against the opening of the "second envelope." When it was revealed that her group's votes had won, Oreta was caught dancing with gusto. She apologized for her crass behavior later on, but the image of her uncaring jig was already seared in our minds.

Where in the world is Panfilo?

9. SENATOR PANFILO "PING. Lacson was implicated in the 2000 murder of Bubby Dacer (a publicist who used to work for then-president Joseph Estrada) and his driver Emmanuel Corbito. Dacer allegedly had information on Lacson's so-called shady deals. Lacson, of course, denied the accusations and other accompanying allegations. However, upon the return of key witness Cezar Mancao, Lacson suddenly announced that he was no longer running for president as he had originally planned. He cited the great cost he would incur in the campaign. Then, before the Dacer-Corbito case could heat up again, Lacson disappeared. He's been missing since February this year.

Your cup size is the end-all and be-all of your existence.

10. PRESIDENT GLORIA MACAPAGAL ARROYO'S BREAST AUGMENTATION OPERATION BELATEDLY EXPOSED. It's bad enough that people accuse you of being a "fake president." But things get even more interesting when the spotlight is on your "fake boobs." Just last year, the Asian Hospital in Muntinlupa City became the center of a maelstrom when it was revealed that the information about Arroyo's breast implants originated from there. Even the National Bureau of Investigation was brought in to determine who dared to divulge the fact that the mammary implants that had augmented the presidential boobs some years before were being removed since the silicone was leaking. Arroyo and her family have all been involved in worse fixes. (Think Hello Garci and Jose Pidal)–but her boob job issue is just downright pitiful. At the end of the day, the most powerful woman in the land just wants big knockers.

Eraserheads Mar Roxas Gloria Macapagal Arroyo Gloria Arroyo Mikey Arroyo Tito Sotto Winnie Monsod Arnold Clavio Ferdinand Marcos Nene Pimentel Jose Mari Gonzalez Mark Lapid Panfilo Lacson Dovie Beams
Your Guide to Thriving in This Strange New World
Staying
In? What to watch, what to eat, and where to shop from home
OR
Heading
Out? What you need to know to stay safe when heading out