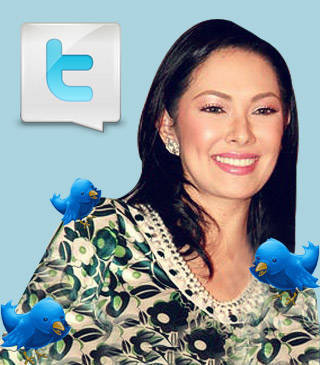 Tweet exchange between American Idol finalist David Archuleta and singer Charice Pempengco, who invited Archuleta to a gay bar in New York where she promoted her song "Pyramid":

Archuleta:
- Mental note to self: always ask where before you go! Wasn’t my kind of place lol, and I had no clue! I guess you live and learn. The..
- upside was that Charice was awesome, and she has an incredible voice. Hope that clears things up! Been seeing some of the tweets.. sheesh!
- Can get crazy quick. NO worries all, I wouldn’t get into things like that intentionally haha. Hope you guys have a good Sunday!
Pempengco:
- Before i go to my interviews, i just want to clear up some things, about the saturday night. David went to see me there perform as a friend
- One more thing, i just got invited there because Pyramid is no.7 on Billboard dance remix and i really had to go there to promote it.
- But bottomline, David just showed his support for me. and i wanna thank @DavidArchie for doing that..
Archuleta: @officialcharice Aw haha thanks Charice! Sorry for causing any problems, I know you didn’t mean to cause any confusion :)

Ruffa Gutierrez, TV host and actress: Tweeties...you’re funny! :) I’m sleeping all the time cuz I’m tired. NO I AM NOT PREGNANT. I’m actually celibate believe it or not :) *shy*

Luis Manzano, TV host and actor: i was physically abused by @isabelledaza (Isabelle Daza, model) into making a twitter and was not given a choice

Loren Legarda, senator and vice presidential candidate:
- The traffic was so bad in EDSA last night, so I took the MRT to GMA Kamuning so I could make it to Arnold Clavio’s show in QTV.
- It was rush hour & riding the MRT with my son, Lean, was a big relief from the traffic.
- I met this pretty, young singer who was on her way to a gig & requested her to sing my favorite song, "Certain Sadness"..
- The singer, Cookie, happily granted my request and we sang with each other while standing in the MRT, much to evryone’s pleasant surprise:)

Risa Hontiveros, Akbayan representative and senatorial candidate: One thing I’m particularly happy about was that I was able to avoid shaking (Jovito) Palparan’s hand after the debate. He he :-p #harapan

Ala Paredes, artist:
- Has to write the speech she is going to deliver on graduation day. jejejejeje.
- Can I use Manny Pangilinan’s speech nalang? :-p

Artwork by Warren Espejo, photo by Noel Orsal of PEP.ph.

David Archuleta Twitter Ruffa Gutierrez Kris Aquino Charice Pempengco Loren Legarda Luis Manzano Risa Hontiveros Ala Paredes Angelica Panganiban Zsa Zsa Padilla Tweets Of The Week Manny Pangilinan
Your Guide to Thriving in This Strange New World
Staying
In? What to watch, what to eat, and where to shop from home
OR
Heading
Out? What you need to know to stay safe when heading out