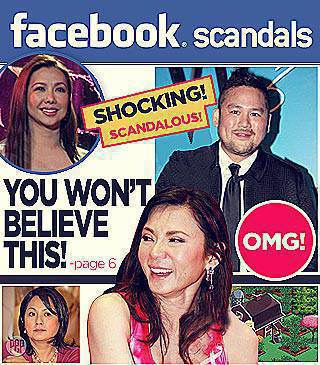 Facebook may very well be the root of all evil. We list 10 scandals spawned by everyone's favorite online spot.

Karl Marx is wrong.   Religion is no longer the opium of the people.   Facebook or FB is our new drug.   But this social networking platform isn't just a repository of both vapid and valid distractions.   It's also the source of disturbing news and ridiculous scenarios.   SPOT.ph lists 10 FB scandals that blew our minds and had us reeling in disbelief.

Last year, while Ranillo was in hot water over her rumored relationship with Manny Pacquiao, Alajar seemingly jumped into the fray.   Her FB comment said it all: "Sino si Krista? Siya ang babaeng anak ni Matt Ranillo III na mahilig pumatol sa may asawa." ("Who's Krista? She's the daughter of Matt Ranillo III who likes hooking up with married men.")   Alajar's anger stemmed from the fact that Ranillo was also rumored to have hooked up with her ex-husband Michael de Mesa in the past.   Alajar then allegedly addressed Pacquiao's wife Jinkee, writing, "I was in her shoes once."   She also added: "If I am Jinkee Pacquiao I will not give up Manny. Krista Ranillo is not at all worth it!"   Alajar's words were said to have been "shared" by some of the people in her FB friends network.

Your sanity will be challenged.

2. A man in Pennsylvania propositions his own daughter

Sometime in 2009, John Forehand, 39, who had not had any contact with his biological daughter for 10 years, used FB to track her down. Unfortunately, his reason for doing so was not fatherly.   In fact, Forehand called himself "Bad Daddy" in his online correspondence with his 13-year-old daughter.   He made graphic suggestions to her and revealed that he had "inappropriate dreams" about her.   Luckily, the girl told her mother about it.   Her mother then alerted the police, who proceeded to lure Forehand to a fake meeting with his daughter.   Forehand showed up at the said meeting with a camera, a tripod, and an unopened box of condoms.   He was promptly arrested.

A change in relationship status has serious consequences.

Early last year, Edward Richardson, 41, of Staffordshire, England, came home to an empty house. His wife, Sarah, 26, had apparently left him.   But his murderous rage was reportedly incited when he saw that she had changed her FB relationship status from "Married" to "Single."   He sought her out at her parents' house.   He broke in and found her in her bedroom.   There, he stabbed her to death.   It is said that he attempted to kill himself as well after the deed, but he failed.   He was sentenced to 18 years in prison for his crime.

Your life could be ruined in a matter of minutes.

In the wake of the tragedy wrought by Tropical Storm Ondoy, Bermejo's FB status allegedly read: "buti n lng am hir in dubai! maybe so many sinners bak der! so yeah deserving wat hapend."   ("It's a good thing I'm here in Dubai.   Maybe there are so   many sinners back there.   So, yeah, they deserve what happened.")   It was no surprise that an online hate mob went after her.   She later revealed that her FB account had been hacked a couple of years before.   But the damage was done.   People had already set up anti-Bermejo groups and even uploaded YouTube videos lambasting her.

Think before you poke.

5. Woman in Tennessee gets arrested for using "Poke" function

To begin with, Shannon D. Jackson was already accused of stalking another woman, who had already gotten a protection order.   Still, she logged on to FB and "poked" the said woman.   Thus, she was arrested.   Her "poke" violated the protection order's stipulations: "no telephoning, contacting or otherwise communicating with the petitioner."   If she's found guilty, Jackson could be jailed for up to a year.

Be careful with your status messages.

In 2009, Belo sued Guevarra for libel. He had been posting status updates referring to the alleged botched buttocks enhancement procedure that Belo had performed on his client.   Belo found out about the said updates because one of her staff was part of Guevarra's FB friends network.   Guevarra remained unfazed and continued to express what he thought about Belo through his FB status updates.   Their case is pending.

If you mess with the president, then you're going to get it.

7. Facebook pulls out poll about killing US President Barack Obama

US Secret Service agents must have gotten a jolt in September 2009 when they got wind of an FB poll that asked, "Should Obama be killed?" These were the possible answers: "No," "Maybe," "Yes," and "Yes, if he cuts my health care."   The application was suspended and the poll was subsequently taken down.   FB employees had to answer questions from the Secret Service.   It was later revealed that the poll had been created by a minor.   Reports said that the Secret Service met with the child and his parents.   They didn't file charges since it was proven that it was nothing more than a tasteless prank.

Shortly after Laurel's cobweb dress got featured on Women's Wear Daily, Gayatin was said to have put up an FB post entitled "My 6-year-old cobweb collection." This led to speculations that Laurel had plagiarized the cobweb design.   This caused a rift between the two.   Designer Lulu Tan Gan lamented the fact that the issue had gotten more complicated because it was all over FB.   And, for a moment there, it really seemed like the people concerned preferred to just slug it out on FB.   Thankfully, the issue has died down.

Your virtual plants and animals could end your career.

Councilors in Plovdiv, Bulgaria were recently criticized for being addicted to Facebook. An article on Novinite.com reveals: "The discovery was made by the Chair of the Council, Ilko Iliev, who reacted strongly scolding the eager Internet farmers.   However, his reaction was to no avail, as the dedicated councilors continued developing their Facebook farms during the City Council meetings."    The councilors' Farmville habit was made possible because the city had recently set up their wireless Internet network and issued new laptops for all 51 of them.   The council's most intense Farmville farmer, a councilor named Dimitar Kerin, was eventually fired because of his addiction to the game.   The report explained: "The proposal to remove Kerin from his respective municipal committee came from Todor Hristov, a former member of Kerin's party, who has argued that Kerin 'needs more time for his virtual farm.'"

10. ABS-CBN reporter RG Cruz has a bone to pick with Korina Sanchez

In late 2009, Cruz's anti-Sanchez FB diatribes finally caught up to him. Sanchez had apparently gotten wind of Cruz's references to her as a "First Lady wannabe," as well as a "queen in her head without a crown."   Sanchez allegedly retaliated with a letter to the network's big brass, demanding that Cruz be fired.   Perhaps, that letter was fake since Cruz still seems to be employed in the said network.