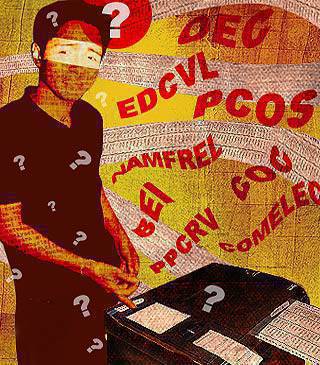 Don't be clueless–or just pretend that you're not–with the 10 acronyms you'll keep hearing at the height of election fever.

With just a few days left before the elections, it'd be a good idea to brush up on some acronyms that you're sure to keep hearing after May 10.   Even if you're not a hardcore news junkie, you can't afford to be totally clueless.   SPOT.ph lists 10 must-know election acronyms.

1. OEC. This refers to the Omnibus Election Code of the Philippines, which contains all the laws governing elections.   It is also known as Batas Pambansa 881. However, it is Republic Act 8436 that authorizes automated elections.

2. COMELEC. This refers to the Commission on Elections. This is the entity that takes care of anything and everything to do with elections in the country.   They're the guys who say what goes.   They implement the rules and regulations concerning elections–from the placement of campaign posters to the counting of votes.   As such, they're also the ones who get a lot of flak during election season.   It's dirty work, as the saying goes, but somebody's got to do it.

3. COC. People who want to run for a certain government position have to file their Certificate of Candidacy at the COMELEC on or before a specified deadline.   This year, 99 people filed COCs to run for president. Only nine were declared official candidates. (Isn't that crazy?)   In any case, it's not uncommon for a person to get his or her COC approved and then, later, when the mudslinging starts, all sorts of COC-related troubles come up.   Most notable are the cases of the late Fernando Poe Jr., (2004 presidentiable) who ran for president in and that of Alfredo Lim (1998 presidentiable).   They both had to deal with citizenship issues.

4. AES. The Automated Election System refers to the technology used in the entire election process– from voting to the transmission of election results.

5. PCOS. This stands for Precinct Count Optical Scan.   This is the machine which will be used for the country's first-ever automated elections. The COMELEC bought a total of 82,000 machines.   Of these, only around 76,000 will be deployed to precincts nationwide.    There are over 6,000 excess PCOS machines, which the COMELEC says will serve as back-up in case of glitches or malfunction.

6. NAMFREL. The National Citizens' Movement for Free Elections is a non-partisan organization whose goal is to serve as a citizens' watchdog to ensure "free, orderly and honest elections" in the Philippines. It has over volunteers from different sectors of the country.   During the 1986 snap elections, over 500,000 NAMFREL volunteers monitored election proceedings.   Despite the fact that the COMELEC did not give NAMFREL accreditation this year, the group will still go about their usual tasks.

7. PPCRV. An entity that seeks to enjoin "civil society and ecclesiastical bodies to help foster a reformed electoral culture in the country," the Parish Pastoral Council for Responsible Voting is another election watchdog. Think of it as NAMFREL...only, perhaps, with more representatives from the Church and other religious organizations. It has been accredited as a poll watchdog this year.

8. BEI. The members of the Board of Election Inspectors are public school teachers appointed to oversee the polling process, as well as administer the rules and regulations governing elections. In effect, they act as representatives of the COMELEC. For each precinct, there are three BEI members assigned. There's a chairman and two others, one of whom will be assigned as a poll clerk.

9. EDCVL. The Election Day Computerized Voters' List contains the names of all the eligible voters. Each precinct will post a copy of the said list and voters can check if their names are on it.

10. ER. No, this does not refer to an emergency room. This stands for Election Return. It's a document printed by the PCOS, which will record the date of the election, the location, the precinct, and the number of votes for each candidate.

Miss World Philippines 2018 Election Elections Comelec Pcos May 2010 Elections Commission On Elections Precint Count Optical Scanner Namfrel National Citizens' Movement For Free Elections Philippine News Ppcrv Coc Certificate Of Candidacy Parish Pastoral Council For Responsible Voting Bei Board Of Election Inspectors Er Election Return Aes Automated Election System Acronyms
Your Guide to Thriving in This Strange New World
Staying
In? What to watch, what to eat, and where to shop from home
OR
Heading
Out? What you need to know to stay safe when heading out