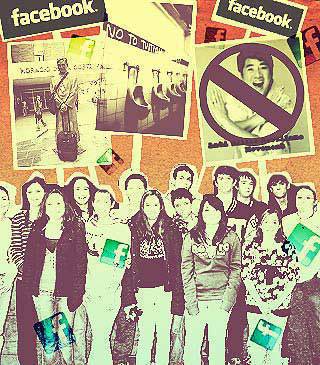 Man can’t live on Facebook alone, so he forms Facebook Groups.   We all need to connect with like-minded creatures even in the virtual world. SPOT.ph lists quirky Pinoy FB groups that prove that there’s strength-"and laughs-"in numbers.

One of the more than 400 jejemon search results on Facebook, the jEjEmOn group has wall posts from people who type "as if a chimpanzee had danced on the keyboard and hit ’enter,’" as SPOT.ph blogger Lourd de Veyra wrote.

Aside from the eye-squint-inducing text, the group also contains "gangsta" photos of groups of teenage boys dubbed West Side Cripz and tReCeRoCkEt’s, among others.

Alternately, for those who make it their life’s mission to rid the world of jejemons, you might find comfort in anti-jejemon groups like JEJEMON BUSTER! and jejemon tamers.

The group’s information tab lists a bunch of stereotypical Filipino idiosyncrasies from "You think Christmas season begins in October and ends in January" to "You like the Black Eyed Peas because one of the guys is Filipino." Its 47,361-strong members add to the list like "you say, ’WIT-WIW!’ instead of whistling it" and "you teach your children ’close open’ and ’beautiful eyes.’" Admit it, you find yourself agreeing to at least one of those.

The group also has photos of Philippine beaches, festivals, and even Jollibee. Then there are some half-naked ladies and gentlemen. (We don’t want to know why they posed in such a state.)

Pinoy pride on Facebook lives on with the "I’m 50% Filipino" group that is deluged with comments from the biracial, tri-racial and so on. With the half-bloods coming from all over the world, the group album looks like a Benetton ad-"with a few racy photos (again!).

Aside from the wall posts, the group also has active discussion threads like the race they’ve been mistaken for and even their height (the thread initiator wanted to know if half-Filipinos inherited the shortness of Filipinos; most of the 68 answers proved her right).

As written on the information tab, the group is "for anyone who is half-Filipino or thinks [Filipinos] are awesome."

Its 20,900 members caps-lock scream their agreement with the group’s cause and share how they can’t post photos of their drinking sessions or secret trips because their relatives are on Facebook now. One member says even her six-month old niece has a Facebook account already. Facing the same dilemma, they exchange privacy setting tips to block the family from content not meant for them. Some good news, though: Its members are thankful that their folks haven’t discovered Tumblr and Formspring-"yet.

Hate message after hate message about Wowowee host and big-time endorser Willie Revillame flood the wall of this group. One user called Revillame worse than jejemons while another said he’s "the cancer of Philippine noontime television." Feeding the anger of the group’s 31,726 members is Revillame’s recent threat to resign if his mother network ABS-CBN does not fire entertainment reporter Jobert Sucaldito for questioning the 75 percent to 79 percent grade average of the Wowowee high school student contestants.

The group’s flames of fury have produced PhotoShopped images depicting Revillame as the devil, among others, which are all posted on their page.

If the previous group is all about hate, this one is all about "love, love, love," as Kris Aquino would say. It’s actually a sincere petition for Aquino to run as senator. The members post Aquino’s characteristics that they think make her qualified to be a senator: pretty, smart, articulate, charming, humble, honest, and religious. It’s not all rainbows and butterflies though. While some want her to run for senator or even president, others said she’s an "immoral nymphomaniac and home wrecker" who is not eligible to join politics.

The group aimed for one million supporters in time for the 2010 elections but unfortunately (or not), they only have 1,001 members as of May 6.

Here we have another group calling for one million supporters for something that is arguably as controversial as Kris Aquino. From simultaneously turning the lights off to not paying Meralco bills, the members exchange ideas on how to deal with the price hike aside from screaming bloody murder.

Given that most Filipinos are affected by the price hike, you’d think the group would have attained, say, a quarter of its goal of one million supporters. They only have 71,325 members as of May 7. Maybe turning on the computer and logging on to Facebook has just become too expensive?

8. Narinig ko sa UP (Overheard at UP)

Those without UP experiences might find themselves missing the punch line of some entries but some quips are universal comic relief like a math professor calling his suck-up student a "nerd" in front of the whole class.

Another one of the Overheard groups, this group contains wisecracks from the Blue Eagles. Get a load of professors cracking corny jokes ("Can we answer the test in bullet points? / Prof: Oh, sure! *turns back* O, ingat lang a. Baka matamaan ako niyan a. Agang-aga. / Class: NGEEEEEEEEE") to Overheard-aware ones ("Guys, everytime you post on the "Overheard" you get half a letter grade down ha."). Students also post their facepalm moments like a student calling this "downright stupid" photo "southeast stupid."

Relive your childhood with Superkat, Batute, Mahimud Ali, Planet Opdi Eyps and more from the Pilipino Funny Komiks series. Browse the group’s photos of these beloved comics or upload your own and then reminisce with the members about these humorous gems. For more finds, check out another Facebook group, Komiks (Philippines).

Jejemon Facebook Groups Pinoy Facebook Groups Filipino Facebook Groups
Your Guide to Thriving in This Strange New World
Staying
In? What to watch, what to eat, and where to shop from home
OR
Heading
Out? What you need to know to stay safe when heading out