Estrada spokesperson Margaux Salcedo has denied reports that the former president did not vote for a vice president, reports ABS-CBNNews.com.

Judge for yourself: Does this YouTube video look real to you?

In the face of this brewing controversy, a YouTube video with close-up shots of Estrada's alleged vote has also surfaced (see above) today.   However, the authenticity of this video and the so-called controversial photo have yet to be investigated.

Estrada himself has denied that the allegation that he did not vote for Binay. In a phone interview broadcast on GMA-7's primetime news program 24 Oras, he told host Mike Enriquez that he voted for all the PMP candidates. Estrada's camp likewise branded the rumor as part of a "smear job" against him.

Whatever the case may be, Estrada can always cite Section 195 of the Omnibus Election Code, which states, "It shall likewise be unlawful to use carbon paper, paraffin paper, or other means for making a copy of the contents of the ballot or make use of any other means to identify the vote of the voter." In other words, it's none of our business whom he voted or didn't vote for.   Estrada, just like any other voter, is entitled to his privacy.   It's just his bad luck that the media considers him good copy. 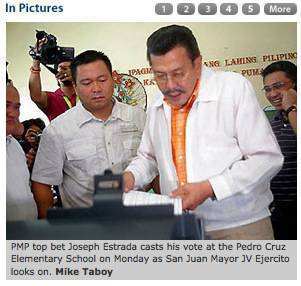 This screen capture of a photo published on GMANews.TV shows Estrada voting. The controversial photo now circulating online is from another photographer who was presumably also present when Estrada cast his vote in San Juan. Unfortunately, there is no ready information available about the said photographer's affiliation or if, indeed, it was he who first uploaded the said photo on Twitpic. (Click on links above to view actual photo in question.)

Jejomar Binay Elections Erap Estrada
Your Guide to Thriving in This Strange New World
Staying
In? What to watch, what to eat, and where to shop from home
OR
Heading
Out? What you need to know to stay safe when heading out