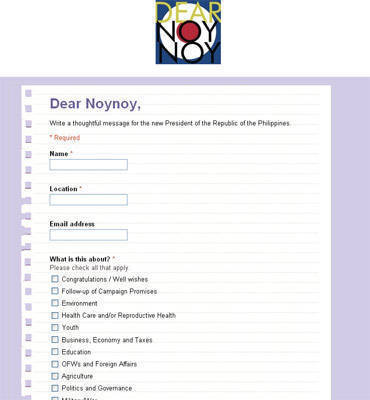 Give leading presidentiable Noynoy Aquino a piece of your mind at DearNoynoy.com.   The website started as a Facebook page collecting suggestions for Aquino on May 11.   After desabling posting on May 13 to give their volunteers time to collate the messages, it was announced on the page that all the gathered information would be moved to DearNoynoy.com. Everyone is invited to write a "thoughtful message" for Aquino, whether it be well wishes or concerns about the environment, health care, education, and other issues affecting our country.

Unlike in the Facebook page, netizens can no longer see each other's suggestions–at least until June 30. (Selected suggestions will be collected and presented as a book to Aquino before the June 30 inauguration.) The admin posted, "It is useless to make you all interact with each other… We count the number of rude posters and rate them by who they declare as 'their president.' The most number of rude messages are posted by [Gilbert] Teodoro's supporters, followed by [Richard] Gordon's supporters and [Manny] Villar's supporters. The Noy supporters rank third by replying to the rest. Stop shaming the candidates you supported."

Dear Noynoy is a project of Rock Ed Philippines in affiliation with Rethink Media Group. 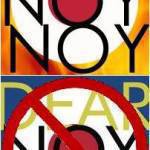 Meanwhile, a "Fear Noynoy" page has also sprouted up on Facebook with the tagline "Fears to a new president" and described as a "Fearful forecast for a President-elect." While "Dear Noynoy" has   77,276 members, "Fear Noynoy" has 173. A sampler of comments posted on the group's wall: