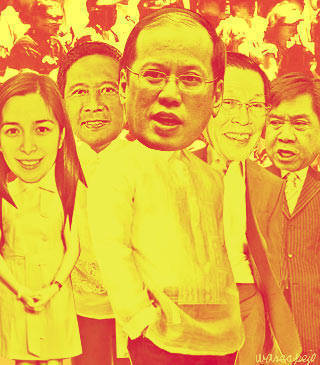 SPOT.ph lists 10 memorable moments that made June 9, 2010 a big day for president-elect Noynoy Aquino and the Philippines. 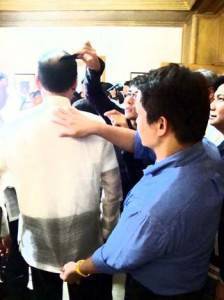 Exactly 30 days after the Philippines’ first automated elections, Senator Benigno Simeon "Noynoy" Aquino III was proclaimed as the 15th president of the country at the Batasang Pambansa in Quezon City. A scion of one of the country’s most high profile political clans, he continues the legacy of Senator Benigno "Ninoy" Aquino, Jr. and former President Corazon "Cory" Aquino. Though he has his share of critics and haters, Aquino’s big day was generally a good one. Lawmakers even took on a lighthearted vibe, if only for a moment. SPOT.ph lists 10 memorable moments that made June 9, 2010 a newsworthy day.

1. ï¿½ The dude looked good. Often criticized for not looking spiffy, Aquino made a fashion statement by wearing a JC Buendia-designed piña-abaca blend barong with a ribbon delicately embroidered on the left hand pocket area. Through her Twitter account, his youngest sister Kris Aquino-Yap, revealed that she had accompanied him when hair expert Pin Antonio gave him a haircut the day before the proclamation. ï¿½ Thank God. ï¿½ No more comb-overs!

2. Kris Aquino-Yap became a low-key de facto stylist. She made sure that her non-fashionista sisters donned stylish blouses by designer Paul Cabral. She also worried about her brother’s shiny forehead. But, as Philstar.com reports, she backed off when he said he didn’t want to powder his face. "Sabi ni Noy, ’Ayaw ko’ So I said, ’Sure, you’re president...whatever you like,’" she told GMA News. She also owned up to picking shoes that were too big for her brother. ï¿½ She promptly had them replaced. (We like this side of you, Kris.)

3. Senator Aquilino "Nene" Pimentel, Jr. cleaned up his comedy. Prior to the proclamation, Pimentel, who is the Senate Minority Leader gave a speech. ABS-CBNNews.com reports that he began by saying, "Hail to the chief and his blessed vice..." (referring to Aquino’s smoking habit). He also kidded about vice president-elect Jejomar "Jojo" Binay’s dark complexion: "Let me add that one of the things why I wanted the proclamation done in broad daylight is to enable me to see the blossoming faces of the victors, especially the vice president." But, perhaps, his most viral joke was when he quipped that he had been told that "PCOS stands for President Cory’s Only Son." The mock-meaning of the acronym may have originated in SPOT.ph blogger Lourd de Veyra’s post, "PCOS of You." Pimentel has certainly elevated his comic digs since he made his inappropriate insertion comment.

4. The stars came out. Dingdong Dantes, Ogie Alcasid, Boy Abunda, Cesar Montano, Jim Paredes, Leah Navarro, and James Yap were among the celebrities sighted at the proclamation. Regal Films matriarch Lily Monteverde and daughter Roselle Monteverde-Teo, as well as ABS-CBN president and CEO Charo Santos-Concio, channel head Cory Vidanes, and talent manager Deo Endrinal also attended the occasion. (So, is a Noynoy Aquino-only Maalaala Mo Kaya episode in the works? Who gets to play him?)

5. There was a Chiz-zy bromance moment. Senator Francis "Chiz" Escudero revealed that he took off the price tag from Aquino’s brand new shoes. (Is there a new bromance brewing? Maybe not. We all know Aquino’s one true bromance partner is Senator Manuel "Mar" Roxas II.)

6. From one smoker to another: ï¿½ US President Barack Obama called to congratulate Aquino. Obama, who, in the past, had taken his time to return President Gloria Macapagal-Arroyo’s call, called Aquino to congratulate him. The two men have something else in common: They’re both smokers. Just like Aquino, Obama has been criticized for his habit.

7. It was a full house. The 1,000-seater Batasang Pambansa gallery was filled with people, some of whom had to stand. Everyone wanted to see Aquino get proclaimed. It didn’t matter that the Glee finale was showing at around the same time that afternoon.

8. The afternoon was filled with ironies. In his blog, New Philippine Revolution, Patricio Mangubat wrote: "If you ask victims of the Marcos’ regime, it would have been totally unimaginable seeing Juan Ponce-Enrile, the jailer of Ninoy Aquino and staunch opponent of Cory Aquino, raising the hands of Noynoy." Mangubat likewise added that it was "very symbolic also seeing Enrile congratulating Jejomar Binay, one of the victims of the Marcos regime and one of the few Ilocano lawyers who stood bravely against their fellow Ilokano, Ferdinand Marcos."

9. The fabulous Aquino sisters. Maria Elena "Ballsy" Aquino-Cruz, Aurora Corazon "Pinky" Aquino-Abellada, Victoria Eliza "Viel" Aquino-Dee, and Kristina Bernadette "Kris" Aquino-Yap made up for the fact that their brother, still a bachelor at 50, didn’t have a First Lady. They bring out his more fun-loving side. In an interview, Ballsy, the eldest among them, deadpanned, "S’ya na ang pangulo ngayon kaya lahat kami bow sa kanya. Marami naman akla s’ya ang panganay. (He’s the president now so we all bow to him. A lot of people think he’s the eldest among us anyway.)" At this, Aquino laughed.

10. The First Lady (in waiting). Though she preferred to sit apart from the Aquino sisters, all eyes were still on Aquino’s girlfriend Shalani Soledad. The pretty Valenzuela City councilor wore a simple black sleeveless shift dress and minimum bling. She was all simplicity and understatement, which endeared her even more to the media and the public. Alas, when Aquino was asked about his marriage plans during his post-proclamation press conference, he replied, "I will consult Madame Auring if she has a prediction. You know that even during the campaign, that is the one question that I cannot answer. I will try to answer that in the soonest possible time." (Well, we hope the fortuneteller’s crystal ball predicts something good for the couple.)