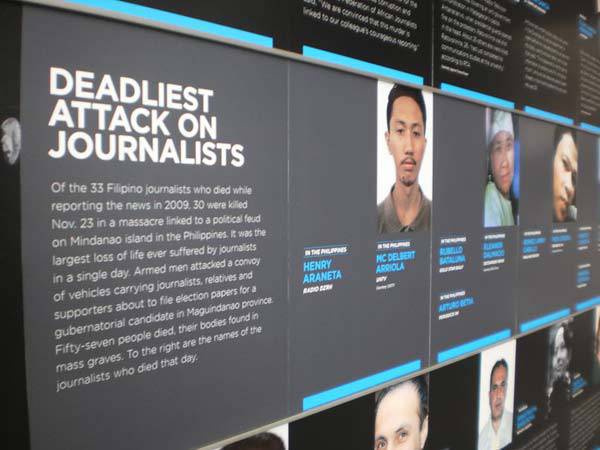 The Newseum dubbed the Maguindanao massacre the "deadliest attack on journalists," as seen in the Journalists Memorial display. The Philippines has been named the deadliest country for journalists in 2009, with 33 deaths, followed by Somalia with nine deaths, Mexico and Russia with six each, Pakistan with five and Iraq with four.

"The men and women on the Journalists Memorial remind us of the importance of a free press and the threats that exist to it around the world," Newseum CEO Charles Overby said. "The Newseum is proud to honor these journalists and the sacrifices they made in search of the truth." A two-story glass structure, the Newseum showcases five centuries of news history. It has seven levels of galleries and theaters plus hands-on exhibits.

Christiane Amanpour, CNN chief international correspondent, was the keynote speaker during the inauguration of the Journalists' Memorial. "A highly respected journalist recognized worldwide for her reporting, Amanpour has covered major crises from hotspots around the world, including Iraq, Pakistan, Afghanistan, Rwanda and Iran. In August, Amanpour will join ABC News as anchor of 'This Week With Christiane Amanpour' which will continue to be broadcast each week from the Newseum," according to the Newseum.

According to a recent statement of the University of the Philippines College of Mass Communication (UP-CMC), 104 journalists were killed during outgoing Pres. Gloria Macapagal Arroyo's administration from 2001 to the present.

The statement reads: "The violence against media is by itself condemnable based on two factors: the sheer number of deaths under the Macapagal-Arroyo administration-an average of one killing every month from 2001 to 2010-and the manner in which the killings were carried out, usually either in broad daylight or in full view of witnesses."

Ampatuan Massacre Maguindanao Massacre Victims Ampatuan Journalists Killed
Your Guide to Thriving in This Strange New World
Staying
In? What to watch, what to eat, and where to shop from home
OR
Heading
Out? What you need to know to stay safe when heading out