"I was so mesmerized by her beauty! She is stunning! She was just a breath of fresh air! Such a really lovely woman," Laurel wrote on his blog post dated June 28 on Stylebible.ph. 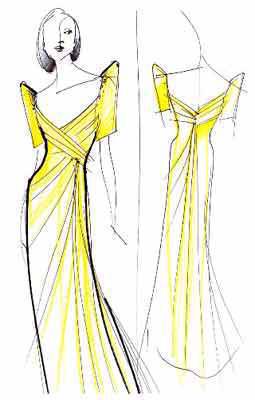 According to 24 Oras, Soledad chose the yellow terno among the four designs Laurel made. It is not clear if the councilor will wear the gown during the inauguration ceremonies at the Quirino Grandstand.

Laurel also suggested other colors for Soledad as many others will probably be garbed in yellow. "She said 'No, I don't want to stand out that much'," Laurel told 24 Oras.

Presidential sister, TV host and actress Kris Aquino will be wearing a Filipiniana gown by Randy Ortiz, reports ABS-CBN's TV Patrol World. Ortiz said that she requested for a simple gown. Ortiz also said that while the gown will have simple lines, the gown will still be glamorous because of her celebrity status. "She wants it feminine, so right away, I thought of yung ilalagay naming embellishments that would make it really fresh-looking." Kris is yet to choose between two designs: a yellow baro't saya and a full terno yellow gown made of piña cloth.

According to 24 Oras, her inaugural gowns will be part of the "First Sister look." It was also stated that she will be donning simpler and more conservative outfits when her brother steps in as the 15th President of the Philippines.

The president-elect will also be unveiling a new pair of spectacles during his inauguration, reports GMAnews.TV. Celebrity optometrist Vivian Sarabia prepared a variety of pairs that were mostly semi-rimmed and rimless. The choices were purposefully made in metal and gun-metal colors since solid black glasses are very much identified with his father Ninoy.

"A major consideration in choosing glasses for Noynoy is to avoid making him look like Ninoy. His own identity must [be reflected by] his glasses," Sarabia said. "His glasses shouldn't be a distraction, but a way to enhance his appearance."

Sarabia however, did not disclose which pair Aquino chose but told GMA News that it will be rimless.

Inauguration Fashion June 30 Inauguration Kris Aquino Noynoy Aquino Presidential Inauguration Rajo Laurel Randy Ortiz Shalani Soledad
Your Guide to Thriving in This Strange New World
Staying
In? What to watch, what to eat, and where to shop from home
OR
Heading
Out? What you need to know to stay safe when heading out