Kris Aquino says she did not provoke big fight that led to breakup with James Yap
Loading
Already a member? Log in
No account yet? Create Account
Spot.ph is your one-stop urban lifestyle guide to the best of Manila. 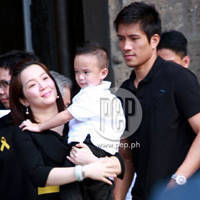 A day before the presidential inauguration of Kris Aquino's brother Noynoy, The Philippine Star published a text message from the TV host saying she did not provoke the fight that led to her breakup with husband James Yap. "We were keeping our distance from each other for several weeks when James exploded."

Aquino also hinted at the "straw that broke the camel's back." She wrote, "It was what James told Baby James in front of me. Sorry, but I can't make public what it was. That's why I kept my silence on The Buzz last Sunday. At three years old, my son is vulnerable and can be emotionally and psychologically damaged."

Aquino responded to this in her text message sent to The Philippine Star: "That snippet of a conversation you printed occurred on April 26. And that wasn't the straw that broke the camel's back… Yes, I am guilty of many times saying I wanted out. But I have never involved our son."

She added, "I have never controlled James. More than one year na nga akong hindi nakikialam sa kanya. We have been living under one roof but totally separate lives… I was tired of lying to the world and lying to myself."

The couple's lawyers will meet in the next few days. Aquino and her two sons, Baby James and Joshua, are staying at a five-star hotel in Makati City while Yap remains at their Makati condo, according to The Philippine Star. Aquino said, "Under the law, because of the kids, I do have a right to our condo in Makati but if he refuses to vacate, ayoko ng gulo. My Mom was insistent before that the practical thing to do was to ask for a prenup. James is smarter than you all give him credit for. He told me then na-in-insulto ang pagkatao niya and I was stupid enough to not insist."

"I just want a chance to heal. Akala ng lahat ako lang yung madaldal at pwedeng masakit magsalita. Hindi niyo lang alam lahat ng insultong inabot na rin ng pagkatao ko sa years na pinagsamahan namin… I am not asking you to take my side but just to see why I am firm in saying this is a separation that will be legalized and finalized."

Photo by Noel Orsal of PEP.ph.

James Yap Kris Aquino
Your Guide to Thriving in This Strange New World
Staying
In? What to watch, what to eat, and where to shop from home
OR
Heading
Out? What you need to know to stay safe when heading out