VP Binay says new office too bare, jokes "I'll get a rash staying here"
Loading
Already a member? Log in
No account yet? Create Account
Spot.ph is your one-stop urban lifestyle guide to the best of Manila. 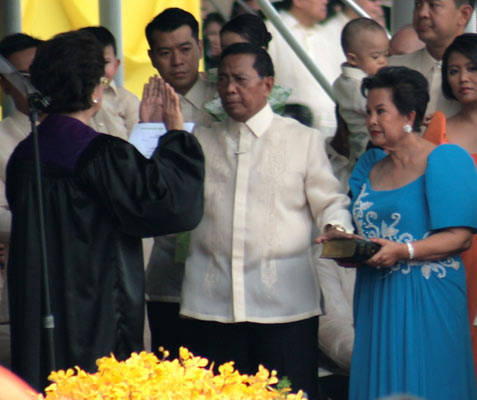 Jejomar Binay takes his oath of office as the vice president of the Philippines on June 30 at the Quirino Grandstand.

On his first day as vice president, Jejomar Binay found his new office "too bare," reports Inquirer.net. "Dapat may konti ring yabang, 'wag lang 'yung sosobra... There must be dignity commensurate to the occupant of the office," he told reporters on July 1.

Binay said he would add more paintings. Since it's "a bit warm," he would also have the air conditioner fixed. Regarding his new chair, he said, "With my size, I can't rest my back. How did [former Vice President] Noli de Castro do it? This is only for six-footers."

The former Makati City mayor used to hold office at the swanky Makati City Hall. Now, the newly elected vice president's office occupies half of the seventh floor of the Philippine National Bank Building in Pasay City. He told his staff, "You're the vice president but you can't even hold office on the entire floor."

According to Inquirer.net, Binay had two other options: the old five-storey Makati City Hall and the government-owned Coconut Palace, which Pres. Noynoy Aquino offered to Binay as his official residence.

Jejomar Binay Binay
Your Guide to Thriving in This Strange New World
Staying
In? What to watch, what to eat, and where to shop from home
OR
Heading
Out? What you need to know to stay safe when heading out