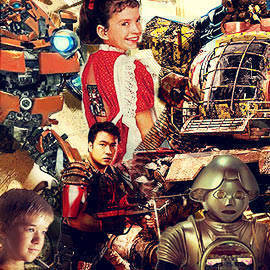 We love R2D2, Optimus Prime, and Voltes V--but these robots we’d rather forget.

(SPOT.ph) We’ve been fascinated with robots ever since we figured that they could replicate some of the tasks humans do. Some of the best science fiction we’ve read about or seen in movies features robots either being helpful to humans or (more ominously and interestingly) taking over from humanity. While there are a lot of robots that we’ve come to love and cherish (think R2D2, Optimus Prime and Voltes V), there are some that we’d rather forget.

This story was originally published on

Nutty specs: This robot is from Short Circuit (1986) and Short Circuit 2 (1988). Supposedly designed for military use by Nova Laboratories, Number 5 activated when he was struck by lightning.

Fail features: It’s annoying, has the voice of a roach and is way too cutesy. It’s kind of a voyeur too.

Best use: Just looking at it, you’ve got to believe that the PIXAR guys got some inspiration for Wall-E from Number 5. Maybe he can join Wall-E and be a trash compactor...on another planet.

Nutty specs: This Small Wonder (1985 to 1989) is called the Voice Input Child Identicant (V.I.C.I., get it?). It was built by Ted Lawson (Dick Christie) to assist handicapped children. Ted brings her home for a family environment and high jinks occur.

Fail features: Vicki (Tiffany Brissette) spoke in a robotic monotone and would return to the closet of her human "brother" Jamie (Jerry Supiran) to recharge. Jamie is being stalked by nosy neighbor Harriet Brindle (Emily Schulman), whose dad Brandon (William Bogert) is Ted’s boss. Ah the 80s, if you didn’t live through it, you should be thankful.

Best use: Vicki often had weird abilities (her neck would stretch to look into peepholes or she’d act like a tape recorder and playback conversations). Keeping a humanoid robot in a closet was a weird fetish, even in the 80s.

Nutty specs: This A.I. (2001) robot, David (Haley Joel Osment), was designed to simulate humans and had the ability to love. Blech. Who needs a robot to love them?

Fail features: Best known for his groundbreaking role in The Sixth Sense (1999), Osment reportedly took the robot role way too seriously. Rumor had it that he supposedly didn’t want to blink his eyes while in robot mode. His weird laugh was creepy, not cute. The whole "wanting to be a real boy" vibe while clinging to the Blue Fairy made it feel like a Pinnochio knock-off.

Best use: David was used as a substitute for a real child who had gone into a coma. No doubt the audience also went into a coma while watching the movie.

Nutty specs: In Bicentennial Man (1999), the NDR series robot Andrew (Robin Williams) is created to perform housekeeping and maintenance duties but begins to show signs of emotion. Over the course of the film, Andrew gets his freedom, falls in love, develops a human nervous system, and fights to be declared human.

Fail features: Whenever Robin Williams does dramas, he tends to fall flat on his face. It was weird enough seeing a robot that looked like Williams, but the fact that he was playing a robot whose ultimate goal is to have sex and marry Portia (Embeth Davidtz) was too much.

Best use: In his quest to be human, Andrew invented many things and amassed a large fortune. We’d use those scientific smarts to find cures for today’s diseases, or just help find Robin Williams’ career again.

Nutty specs: Sam (Sam Bumatay) of Ay, Robot! (2005) shares some similarities with Number 5 and Vicki. She starts out as a ragdoll that transforms into a little girl robot when it gets hit by lightning.

Fail feature: Did you read that last sentence? How can a ragdoll that’s struck by lightning suddenly turn into a humanoid yet call itself a "robot." We realize sci-fi requires some stretching of the imagination, but this is just braindead.

Best use: Sam was used by the other characters on the sitcom to wash clothes, play online games, and go on Friendster. With those things on her resume, she’s better off being struck down by another lightning bolt.

Nutty specs: These robot twins appear in Transformers: Revenge of the Fallen (2009). The first Transformers movie was such a fun film that we expected the sequel to be just as good, if not better. It wasn’t and these twins were a big reason why it sucked.

Fail features: The twins kind of looked like robotic apes, spoke in jive, and couldn’t read. (Are those racist stereotypes or what?) In any case, their non-stop chatter was so annoying that you end up hoping the Decepticons to crush them.

Best use: Remember how Jazz was torn apart by Megatron in the first Transformers movie? Yep, these two deserve "the Jazz treatment."

Nutty specs: Twiki appears in Buck Rogers in the 25th Century (1979), a TV series based on a comic strip (which also spawned a series of movies) that rode on the sci-fi wave that Star Wars. Twiki was a robot (or ambuquad) made to work in space mines. He was often seen carrying the disembodied Dr. Theopolis on his chest.

Fail features: Voiced by legendary voice actor Mel Blanc, Twiki sounded like a combination of Porky Pig and Yosemite Sam. The most irritating feature of Twiki was his blurting "bidi-bidi-bidi" in conversations.

Best use: This was comic relief in the late 1970s? Twiki was little more than a waiter who carried around Dr. Theopolis (an intelligent computer with a voice). The duo tried replicating Star Wars’ C3P0-R2D2 dynamic. Sorry, guys. You fail in comparison.

Nutty specs: This robot wreaked havoc in Robocop (1987). In contrast to the heroic, humanoid Robocop (Peter Weller), the ED-209 was a violent, glitch-prone creation.

Fail features: You mean aside from the fact that it kept malfunctioning and killed innocent people?

Best use: In subsequent Robocop sequels, the ED-209s were relegated to security and guard duty. We’re not sure we’d trust these creepy chicken walkers with guarding our homes though.

Fail features: The robots use recycled parts, quite a positive message during these environmentally-conscious times. Then again, they look like rip-offs of mechanical robots from The Matrix Revolutions and Robocop. The movie’s storyline itself seems like a mishmash of recycled concepts from other films.

Best use: This is too easy. Recycled robots from recycled concepts should be dumped in the scrap heap. 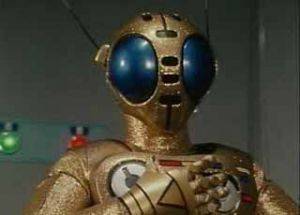 Nutty specs: The golden android Peebo, who appears in Choudenshi Bioman (1984), was sent to Earth to assemble the Super Electronic Bioman team to defend the planet against Dr. Man and his minions.

Fail features: An obvious rip-off of C3P0, Peebo was supposed to be the organizer of the Bioman squad. Too often though, that high-pitched screechy voice and overall ineptness made it a laughingstock. Hell, even the sound of vuvuzelas are less annoying than Peebo’s voice!

Best use: We want its golden hide melted for financial considerations, but we’d prefer taking out its voicebox and just giving it a less cringe-worthy voice.

Tv Robots Robots Movierobots
Your Guide to Thriving in This Strange New World
Staying
In? What to watch, what to eat, and where to shop from home
OR
Heading
Out? What you need to know to stay safe when heading out