PHOTOS: Fashion at the State of the Nation Address

What did the fashionalista lawmakers wear to P-Noy’s first SONA? 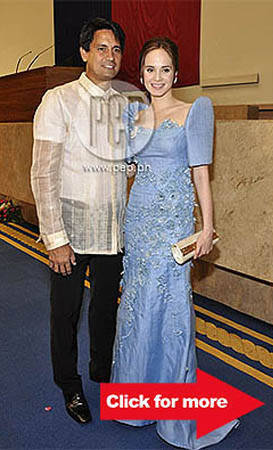 President Benigno "Noynoy" Aquino’s first State of the Nation Address (SONA) was much awaited, not only in anticipation of the "shocking news" that the Palace promised, but also to take a peek at this year’s SONA fashion parade.

Simple elegance seemed to be this year’s fashion theme as most solons donned less flashy ternos and barongs for President Benigno "Noynoy" Aquino’s first SONA held at the House of Representatives in Batasang Pambansa, Quezon City.

Senator Loren Legarda, sporting shorter hair, wore an off-shoulder cream pinya-woven top. According to Inquirer.net, the top belonged to Legarda’s mother. She matched the pinya top with a printed malong in bright colors. According to designer JC Buendia’s tweet, Legarda was "Best in shoulders."

According to GMAnews.TV, former Senator Nikki Coseteng, who was one of the first to arrive, wore a green gown with an alampay.

Party-list Rep.Teddy Casiño also stood out with his barong bearing a red and black symbol of a dead body superimposed with a bulls’ eye sign in front. Underneath the symbol was the word "STOP" to send the message: "Stop the killings in the Philippines."

SPOT.ph wants to know: Who gets your vote for SONA’S best-dressed?

Photographs from Sany Chua of PEP.ph and Jim Punzalan.