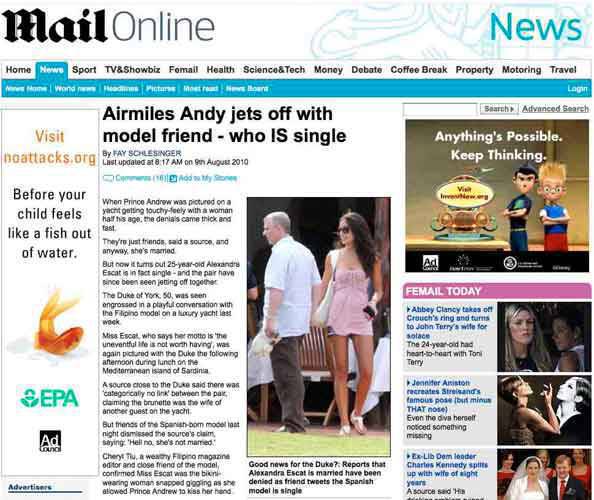 Filipina model Alexandra Escat, 25, was photographed bikini-clad and giggling as Britain’s Prince Andrew, Duke of York, 50, kissed her hand while on a luxury yacht in Sardinia last week, reports DailyMail.com.uk. According to FemaleFirst.co.uk, the Duke kissed Escat’s hand to thank her for putting sun cream on his back. The two have since been spotted jet-setting together. 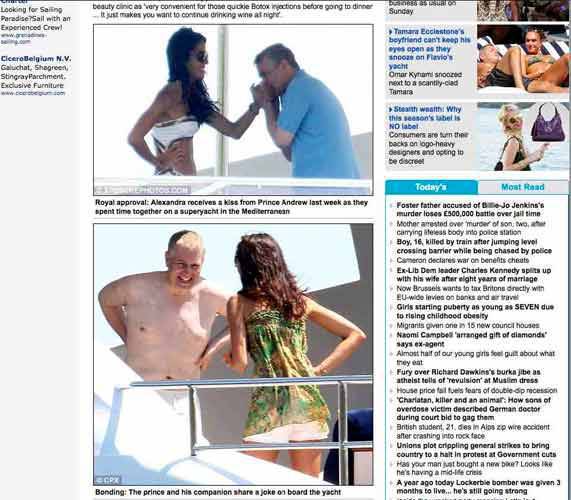 The report said a source close to the Duke said there was "categorically no link" between the two, saying Escat was the wife of a guest on the yacht. But friends of Escat said, "Hell no, she’s not married."

Escat’s friend and magazine editor Cheryl Tiu confirmed on Twitter that it was indeed Escat on the yacht with the Duke but she said the two are just friends, according to DailyMail.com.uk.

DailyMail.com.uk reports that Escat grew up and studied public relations in Madrid, her mother’s birthplace, and then moved back to Manila when she was 23 years old. She is only three years older than the Prince’s eldest daughter Princess Beatrice, 22, according to FemaleFirst.co.uk.

However, Escat’s Facebook account says she graduated from the International School Manila (ISM) in 2003. She is close friends with fellow ISM alumni, singer-actress KC Concepcion and chef Stephanie Zubiri. Concepcion and Escat were bridesmaids at Zubiri’s wedding in France in 2006. 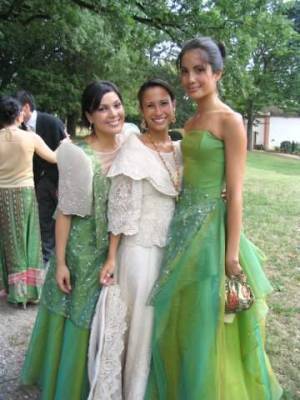 Alexandra Escat in a commercial for Cream Silk Everyday Pack

For more on this story, log on to DailyMail.com.uk and FemaleFirst.co.uk.

Alexandra Escat Princeandrew Dukeofyork Filipina Model Alex Escat Escat Kc Concepcion
Your Guide to Thriving in This Strange New World
Staying
In? What to watch, what to eat, and where to shop from home
OR
Heading
Out? What you need to know to stay safe when heading out