Lindsay Lohan admits failing drug test, may go to jail again
Loading
Already a member? Log in
No account yet? Create Account
Spot.ph is your one-stop urban lifestyle guide to the best of Manila.

Hollywood actress Lindsay Lohan Tweeted that she failed a court-ordered drug test, which could result in her being sent to jail again for 30 days, reports AFP via Yahoo News. According to People.com, Lohan was released from rehab on August 24 after she served almost two weeks in jail for her drunk-driving case. Judge Elden Fox warned her that failing a court-ordered drug test means she would be sent back to jail for a month.

Lohan, 24, Tweeted, "Regrettably, I did in fact fail my most recent drug test. If I am asked, I am prepared to appear before Judge Fox next week. Substance abuse is a disease, which unfortunately doesn’t go away over night. I am working hard to overcome it, and I am taking positive steps forward every day. I am testing every single day and doing what I must do to prevent any mishaps in the future."

She added, "This was certainly a setback for me but I am taking responsibility for my actions and I’m prepared to face the consequences. I am so thankful for the support of my fans, loved ones and immediate family, who understand that I am trying hard and that I am a work in progress, just like anyone else." 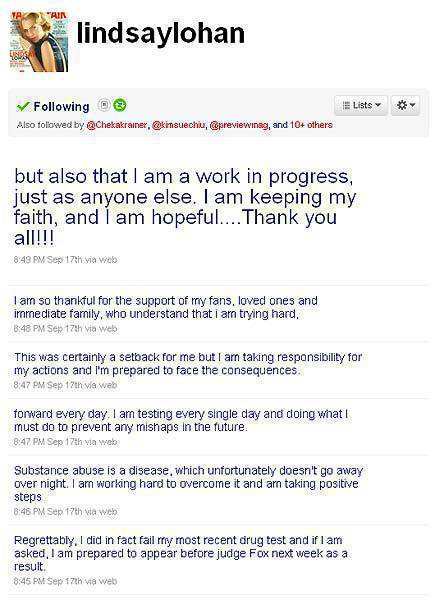 People.com reported on September 18, "So far, (Judge Fox) has not yet set a hearing in the matter." According to an AFP report posted by Inquirer.net, Lohan "was arrested three years ago for driving under the influence, and again two months after that for drunk driving and cocaine possession--but served a mere 84 minutes in jail after the arrests."

For more on this story, log on to Yahoo News and People.com.

Lindsay Lohan Drugtest Drugabuse
Your Guide to Thriving in This Strange New World
Staying
In? What to watch, what to eat, and where to shop from home
OR
Heading
Out? What you need to know to stay safe when heading out