Robin Padilla admits he married Mariel Rodriguez in India on August 19
Loading
Already a member? Log in
No account yet? Create Account
Spot.ph is your one-stop urban lifestyle guide to the best of Manila. 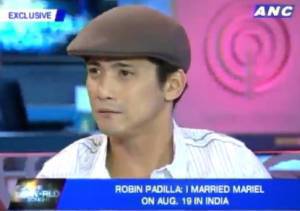 In the wake of the brouhaha over his supposed Ibaloi wedding to TV host-actress Mariel Rodriguez in Baguio City, Robin Padilla finally came clean last night.

Rodriguez later joined Padilla and Palma before the news show wrapped up. The couple revealed that the wedding ceremony was performed at a mosque located near the Taj Mahal. Padilla, known for his grand romantic gestures, emphasized the significance of getting hitched at the world-famous "monument to love."

Padilla and Rodriguez also appeared live on ABS-CBN’s late night entertainment show SNN, where the latter’s manager Boy Abunda is a host. There, Padilla told Abunda, "Sorry sa nangyaring pagtatanan. (Sorry for the elopement.)" Rodriguez likewise disclosed that she has not converted to Islam (Padilla’s religion) and Padilla is not asking her to do so.

For more of this story, log on to ABS-CBNNews.com.

Robin Padilla Marielrodriguez
Your Guide to Thriving in This Strange New World
Staying
In? What to watch, what to eat, and where to shop from home
OR
Heading
Out? What you need to know to stay safe when heading out