President Noynoy Aquino and a woman identified as "Barbie" were photographed together on their way to have dinner on October 9, reports Saksi. Wearing a black dress, Barbie is seen walking beside the President in the photo, but her face has been edited out, keeping her identity a mystery. The supposed date was supposedly held at the Nuvo Restaurant and Wine Bar in Greenbelt 3 in Makati, according to tweets and tabloid reports.

The Manila Standard Today and the Sun Star Manila identified his date as "Barbie Palagos." SPOT.ph, as well as bloggers like www.filipino-tv.info, and Webwatcher88 found a woman on Facebook with that name who lists her "Political Views" as "Yellow" and says she is from Davao City, lives in Alabang, is 34 years old, employed by "CWCL" and a graduate of the University of Dartmouth: 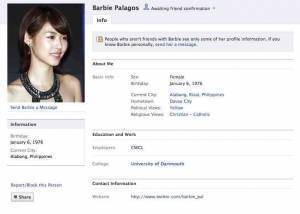 Asked about this alleged date, Aquino said he was "just being friendly" with the woman he first met "several years ago," according to GMANews.tv. "’Yong nakasama ko do’n, hindi na yata kami magkikita muli dahil ayaw niyang center of attention siya. (I might not see her again because she doesn’t like being the center of attention.)" In a Saksi report, the 50-year-old bachelor said in a mix of Filipino and English, "I will appeal to all of you; do you think anything can happen if I am in a fishbowl?"

"I’ll inform you if there are any changes. But at this point in time, priority has to be matters of the state," PEP.ph quoted Aquino as saying. "In matters of the heart, I’ll just watch DVDs," he quipped.

Aquino has yet to reveal the real score between him and Valenzuela Councilor Shalani Soledad; both have remained tight-lipped on their alleged breakup. Soledad was recently linked to Valenzuela Mayor Sherwin Gatchalian, but the "Presidential Sweetheart" denied it on her Twitter account.

For more on this story, log on to PEP.ph and GMANews.tv.

Noynoy Aquino Noynoyaquinobarbie
Your Guide to Thriving in This Strange New World
Staying
In? What to watch, what to eat, and where to shop from home
OR
Heading
Out? What you need to know to stay safe when heading out