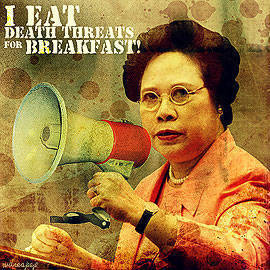 Profiling Miriam Defensor Santiago: 10 Reasons She Has a Beautiful Mind 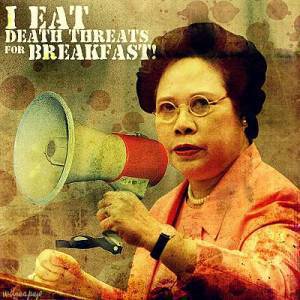 Senator Miriam Defensor Santiago has always been one of the most interesting politicians in the country. She became a household name when President Cory Aquino appointed her as the head of the Bureau of Immigration and Deportation in 1988. Back then, the fearless Ilongga was a welcome change from government officials who talked a lot but did not say much. She definitely talked the talk and walked the walk. This, of course, earned her many enemies. Instead of fearing for her life, she bravely quipped to the press, "I eat death threats for breakfast!" SPOT.ph plays pop profiler and lists 10 reasons that make Santiago’s mind truly beautiful. 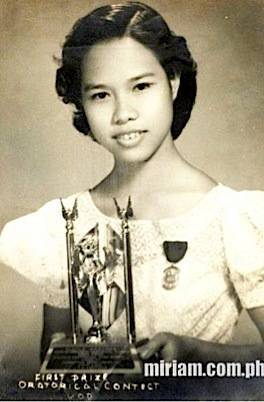 An undated photo of a young Senator Miriam Defensor Santiago. Check out the caption: First Prize, Oratorical Contest. No surprise there.

1. She’s a Gemini. Born on June 15, Santiago is a Gemini. According to PsychicGuild.com, Geminis are known for their "intense mental energy" and are "always on the move" and "thirsty for knowledge and new experiences." Apparently, Geminis "have also gained the reputation of being the incessant talkers of the zodiac." On the flip side, Geminis can be perpetually tense, superficial, and inconsistent. Prior to entering politics, Santiago had said, "Read my lips. I have no plans for 1992, except possibly to defy the laws of medical science and to represent the country in the 1992 Barcelona Olympic Games--preferably in the fields of boxing or wrestling!" and "Me enter politics? I would rather stick needles in my eyes." (She obviously changed her mind.)

2. She’s the firstborn. Santiago is the eldest of seven children. In his book Growing Up Firstborn, Dr. Kevin Leman, who is considered an authority on the study of birth order, observed: "The firstborn in every family has unmistakable traits that help him or her in life--or make life harder. If you’re married to one, you know that a firstborn can be relied on...or can be a real nitpicker. If you work with one, you know they can be tough taskmasters. And if you are one, you know that everybody always expects you to do everything. Perfectly."

In 2007, at the height of the NBN/ZTE Broadband controversy, Senator Miriam Defensor Santiago issued this challenge to her detrators: "I challenge the shadowy faces behind this corrupt media blitz. Come on you hypocrites, stop being sneaky. Be men, come out of the bushes, and reveal yourselves. Since you have chosen to engage in character assassination, let us have a showdown at the OK Corral. "

3. She can "keep up with the boys." When she attended the University of the Philippines in Diliman, Quezon City, Santiago broke the record of "50 years of male dominance, by topping the written examinations and getting appointed as the first female editor-in-chief of the nationally prominent student newspaper, The Philippine Collegian." During that time, she also "became the first female to win as Best Debater in the annual debate between UP Diliman and UP Manila law schools." To this day, many pundits think that Santiago has got "more balls" than most of her male counterparts. 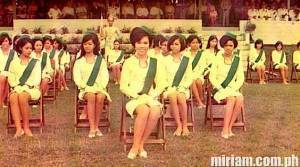 4. She’s an enforcer. Santiago is not afraid of being hands-on when it comes to smoking out corrupt officials. She’s the perfect enforcer. "Field Guide to the Enforcer: The Punishers," a Psychology Today, article explains that enforcers are "compelled to punish wrongdoers and stamp out injustice." Enforcers "do whatever they feel is necessary to keep their community in order--no matter the personal cost." The article adds, "Unsurprisingly, enforcers gravitate to police work and the military. But they can also be drawn to teaching, athletic coaching, or other professions involving leadership and social control."

Just recently, Senator Miriam Defensor Santiago was in the news again because of her "DILG + PNP = Jueteng" privilege speech.

6. She wasn’t a typical mother. In a People Asia interivew, Santiago revealed, "One time I was in the library when the dinner bell rang. I didn’t notice because I was busy trying to finish something. So, as was the family rule, they started eating ahead of me. If a family member has been notified that he’s late then everybody gets to eat early. When I came out, my two children (sons Narciso III and Alexander Robert) were not speaking of me as a person but as a thing. They were saying, ’It’s coming out. It’s coming to the dinner table. It’s eating.’ By this kind of humor I began to realize how alienated I was from my family. I tried to become more accommodating of my relationships with others."

7. She’s married to a relatively low-key man. Just as Santiago is hot copy, her husband is hardly ever seen in public. Narciso "Jun" Santiago Jr. served as the undersecretary of the Department of Interior and Local Government during President Joseph "Erap" Estrada’s adminitration. While Santiago comes out with guns blazing each time mud is thrown at her--her husband practically ignored articles that criticized him for being too fond of cockfighting and questioned his credentials. It makes sense that a fiery personality like Santiago would be stick with someone with a much calmer disposition. When asked by People Asia about the secret to their successful marriage, Santiago replied, "We are very fascinated with each other’s personalities. It’s endless fascination. I’m very happily married and I hope he is, too."

In 2009, Senator Miriam Defensor Santiago had it in for government officials who starred in infomercials. In this clip, she also orders two women to leave the Senate gallery (at 2:12).

8. She’s a survivor. Santiago rallied through when she lost her bid for the presidency in 1992 (President Fidel V. Ramos won that race). She slo resumed being a public official despite breaking down when her youngest son, Alexander Robert, reportedly committed suicide in 2003. 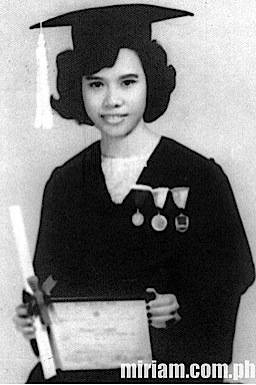 The young Senator Miriam Defensor Santiago in yet another undated photo.

10. She can mess with our minds. In 2001, Santiago was among the senators who voted against the opening of a bank envelope during the impeachment trial of President Joseph "Erap" Estrada. Santiago announced, "I will jump headfirst from a helicopter in Luneta if Estrada gets removed from power." However, when Estrada was indeed ousted, she merely told the public, "I lied." Pundits theorized that she was either messing with us or that she herself was already messed up. In the latter part of her eventful career as a public servant, critics have even accused Santiago of becoming just like the traditional politicians she seemed to detest in the past. (In any case, there’s never a dull moment with the woman.)

Miriam Defensor Santiago Profiles Profiling
Your Guide to Thriving in This Strange New World
Staying
In? What to watch, what to eat, and where to shop from home
OR
Heading
Out? What you need to know to stay safe when heading out