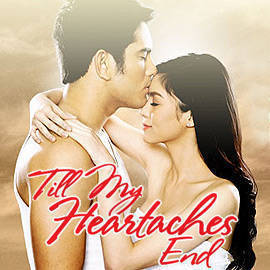 Till My Heartaches End: A Cheesy Song (and Movie) 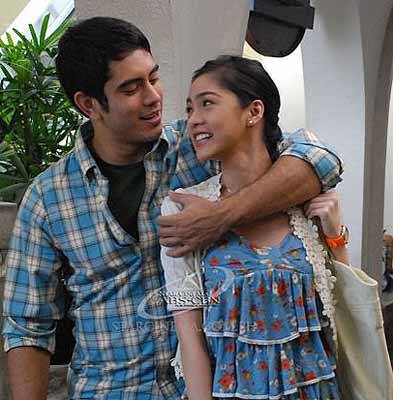 Allow me to gripe about the notions of romance in Pinoy romantic comedies. I've sat through about ten of them this year-that's roughly one rom com per month. Usually I have to sit through it alone-who am I kidding, I always sit through them alone-clutching my parmesan popcorn in the dark, surrounded by droves of giggling colegialas and their loyal gay BFFs, random couples on a date, and old ladies. Often I find the audience more interesting to watch than the movie itself, but I tried my best to concentrate on this one.

Directed by veteran filmmaker Jose Javier Reyes, this romantic comedy is about a lonely girl named Agnes (Kim Chiu) and an ambitious boy named Paolo (Gerald Anderson) who "fall in love and fall out of love."  Fortunately, they picked a hot, young love team and surrounded them with fantastic character actors so the movie is relatively easy to watch. Unfortunately, the microphone taped under Gerald's tight white shirt was visible more than once. That wasn't easy to watch. I'm pretty sure those weren't his nipples because the wire was visible, too.

Kim Chiu is as cute as ever in her innocent doe- eyed way, but the character she plays is only Maria Clara on repeat: sweet, simple, subservient Pinay. She wears pearl studs and cardigans, she cries on her pink cell phone when she fights with her boyfriend. Kim looks the part perfectly, down to the delicate gold cross pendant hanging from her swanlike neck. But Agnes cries a little too much for my taste, perpetuating the stereotype that women cry all the time. In a token fighting-in-front-of-the-gate scene, her hot stuff boyfriend Paolo accuses her of exactly this and Agnes promptly starts crying.

Meanwhile, Gerald Anderson's Paolo is a poor boy with a lot to prove. From working odd jobs, he becomes a successful real estate agent, selling luxury condos with his sales partner Leah (super tan Desiree del Valle) who is always dressed more like a party girl than a realtor. When Paolo's lifestyle and attitude change, he has no more time for the conscientious Agnes, who’s reviewing for her board exams. He has a fling with his co-worker, and takes it out on his doormat of a girlfriend. Paolo is a macho man in the making, with just enough boyishness to make him endearing. But he's already boorish and insensitive-discussing his relationship woes in a strip bar with beers and pole dancers in the background-but  poor Agnes loves her boyfriend so much she turns into a possessive nag, driving him into the arms of another woman, someone more sexually aggressive, emotionally supportive, and easily available.

By now you know that it is kind of inevitable that Paolo cheats on Agnes-the only real action that drives the story forward.  The movie is told in gossipy flashbacks, which is a clever device, but still not enough to give the story real backbone and pathos.

I'm sure a legion of fiercely loyal Kimerald fans don't mind watching their favorite love team go through the motions of first love, that is, "hold on to a relationship that’s bound to end" which eerily echoes the recent controversy surrounding them. Has the Breakup Banner been raised over the house of Kimerald? Fans, discuss.

Whatever the case may be, I'm sure the popularity of these two hardworking young actors will only translate to plenty of ticket sales-which is really the goal anyway.

But perhaps my biggest gripe about this movie was the title song they picked: Till My Heartaches End, a very cheesy ballad from the nineties. Go, sing along. I know you want to do it. I did.


Check to see where the movie is showing.

Till My Heartaches End Kimchiu Geraldanderson