Chef Sau del Rosario, Jon Avila, Risa Hontiveros, Lady Gagita and more speak of acceptance and equality for LGBT Pride March on December 4
Loading
Already a member? Log in
No account yet? Create Account
Spot.ph is your one-stop urban lifestyle guide to the best of Manila. 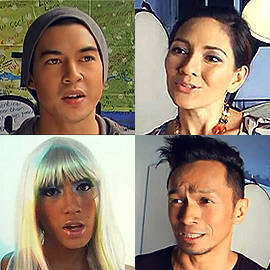 Advocates for LGBT rights speak against prejudice and rally for equality. Chef Sau del Rosario says, "It’s like asking ’Is being a man bad? Or is being a woman bad?’. "

Says Patalinghug, "We want to spread the message about equality and "one love" which is the theme for this year. We are focusing on HIV and AIDS awareness due to the rise of the number of infections." The videos were shot during the photo shoot sessions of Headshot Clinic: ACT by Niccolo Cosme.

The Pride March with the theme, "One Love: Stop AIDS, Promote LGBT Human Rights, Keep the Promise" will be in Quezon City from 2 p.m. onwards and is a proactive stance for HIV-AIDS awareness.

For more information on the Pride March, visit the Task Force Pride website.