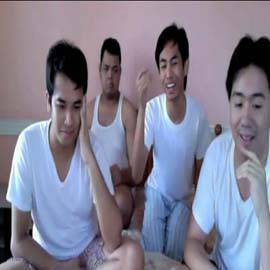 We rounded up the country’s most popular videos of the year--from funny dance numbers to creepy talent shows, and internet celebrities that are just plain goofy.

If Shakira's "Waka Waka," Old Spice's "Questions," and the iPad version of "Will It Blend?" topped the list of the world's most popular viral videos this year, the Philippines comes close with its endless supply of funny dance numbers, creepy talent shows, and goofy internet celebrities. Spot.ph rounded up and ranked the country's most clicked and most shared viral videos of 2010. See if your favorites made it to the list.

Filipinos go gaga over Americans who do Filipino things, such as the Bahay Kubo baby, Travis Kraft's adobo, and Ako Si Chris. The newest white dudes to capture our cyberhearts are Turock (a.k.a Torey) and Jason. They claim to have lost their jobs in the US and decided to head to the Philippines to try out different ways to earn money-and we don't mean climbing the corporate ladder. Their first and most popular video, "American Taxi Drivers," shows the two running a taxi cab from Isabella to Cagayan for only P10 to 30 a ride-"at may aircon pa!" The PI Job Experiment is getting a huge buzz, so they followed up with more Pinoy jobs-as taho merchants in Marikina and jeepney drivers in Kalumpang.

Bern Josep Persia a.k.a. Bekimon's internet stardom rose faster than you can say "baklang jejemon." The 24-year-old former call center agent posted videos of himself spoofing humorous life situations such as holdups, horoscope readings, and celebrity interviews. The catch: he speaks in hardcore gay lingo. His most viewed video is "Mudak (mother) Bekimon's Excuse Letter for Junakis (child)." It's been only a few months since his first viral video, but he's already made numerous radio and TV appearances, as well as a spot in the telenovela Juanita Banana starring Bianca Manalo. He continues to post homemade videos and clips of his work on his YouTube site.

As if Charice Pempengco's role in Glee Season 2 wasn't enough to make fans go on a surfing frenzy for online streams and recaps of her performance, a supposed video of her audition was released a month later. Fans and haters alike wanted to see how she bagged the coveted role of Sunshine Corazon, Rachel's potential vocal nemesis. Unfortunately, the 18-year-old Pinay singer denied that the video clip of her doing a rendition of Beyonce's "Halo" is her Glee audition. "Para po sa US Magazine po ’yon at hindi sa Glee. Noong nag-audition po ako, private po ’yon. Ang alam ko po hindi nila ako bini-video," Charice told ABS-CBN in an interview. If she did this well for US Magazine, we wonder how she nailed it for Glee.

Talk about an all-out performance. Malabon City's Gaya Gaya Puto Maya lip-synching contest spawned what nutsomundo.com refers to as "the most shocking, creepy, and bizarre lip-sync contestant you'll ever see." What Whitney Houston's "I Will Always Love You" has to do with our worst ghoulish nightmares, we will never know. The drag performer, whose identity is still unknown, could give Japanese horror flicks a run for their money. We wonder if he bagged the first place trophy that night.

When Glee fans searched for Season 1 Episode 19 recaps online, it wasn't just to see Artie's "Safety Dance" performance. Filipino fans caught a glimpse of a Jollibee store in the background during the dance number and they wanted to see it again to make sure their eyes weren't playing tricks on them. True enough, it was confirmed that Jollibee's Eagle Rock Mall Los Angeles branch was one of the lucky establishments featured in the mall scene. When Jollibee execs were asked if this was part of a deal with Glee, they said "no," and that they were "pleasantly surprised" at the unexpected publicity.

He may not have won the first season of Pilipinas Got Talent, but he sure is the most controversial contestant. Drag queen Joel Amber a.k.a. Big Mouth performed the local rock song "Banal na Aso," but it wasn't his singing that made jaws drop. It was his mimicry of animal sounds, especially his realistic-and, not to mention, disturbing-horse neigh. The video was so astounding that it was featured in various TV shows in the US, including Jimmy Kimmel Live! and Attack of The Show.

When Lady Gagita and Haronce of Mayaman University uploaded their comic parody of Lady Gaga's "Telephone," the stats went off the charts. As it was about to hit the 1.8 million mark, it was flagged down and removed from YouTube for copyright violations.It didn't stop Lady Gagita from spoofing more hit videos such as "Bad Romance" and "Alejandro," giving her a fan base both in and out of the Philippines. They re-uploaded the "Telephone" parody, but it has yet to reach 300,000 hits.


We Love You, Maria Venus Raj

Just when we think that Miss Philippines Venus Raj's "major major" answer to the Miss Universe Q&A has become the most searched pageant video clip, four gay guys steal the spotlight. Friends Veejay Floresca, Martin Bautista, Lex Librea, and Aleq Africa showed their full-pledged support to Venus by recording and uploading their unrehearsed ecstatic reactions as she made it to the top 15. The video became an instant hit and even made it to Perez Hilton and other media outlets. Less than a month later the four bagged a KFC commercial where they spoofed their own video, this time holding KFC Shakin' Shots while jumping up and down.

Known for their gimmicks such as mid-air trivia games and scavenger hunts, budget airline Cebu Pacific surprised the unknowing passengers of one domestic flight in September with a new twist to their safety demonstration. Instead of the usual robotic and often boring procedure, the female FAs danced to a mash-up of Lady Gaga's "Just Dance" and Katy Perry's "California Girls."  One passenger recorded the entire thing and uploaded it on YouTube. It racked up more than six millions views in just five days. Cebu Pacific followed up a month later with the male version, this time performing to Glee's "Safety Dance."


Cebu Inmates Dancing Michael Jackson's "This Is It"

The dancing inmates from Cebu Provincial Detention and Rehabilitation Center (CPDRC) first gained global recognition when their performance of Michael Jackson's "Thriller" was posted on YouTube in 2007. The original upload (no longer available due to copyright claims) had over 37,591,037 views. When the King of Pop passed away last year, the inmates made a heartfelt tribute showcasing some of his hit songs.

To commemorate the his first death anniversary, MJ's American choreographer Travis Payne enlisted the help of fellow dancers Daniel Celebre and Dres Reid and they flew all the way to CPDRC to choreograph the epic "This Is It" number. The result? Over 10.5 million hits. The video is also part of the official "This Is It" DVD launched by Sony worldwide in January.