UP students and alumni back UP Law Dean Marvic Leonen who resigned due to plagiarism accusations
Loading
Already a member? Log in
No account yet? Create Account
Spot.ph is your one-stop urban lifestyle guide to the best of Manila.

UP students and alumni have issued statements of support for University of the Philippines (UP) College of Law Dean Marvic Leonen, who gave in his resignation letter dated December 7 after being accused of plagiarism, reports GMANews.tv.

According to the report, Leonen led a group of UP law professors called UP Law 37 in August to call for the resignation of Supreme Court Associate Justice Mariano Del Castillo for alleged plagiarism. The report adds that on December 4, lawyers’ group Philippine Social Justice Foundation (Philjust) sent Leonen a letter "calling his attention to what appeared to be a case of plagiarism" in his 2004 article titled "Weaving Worldviews: Implications of Constitutional Challenges to the Indigenous Peoples Rights Act of 1997," which led to his offer to resign. His resignation letter is to be deliberated on December 17 according to GMANews.tv. 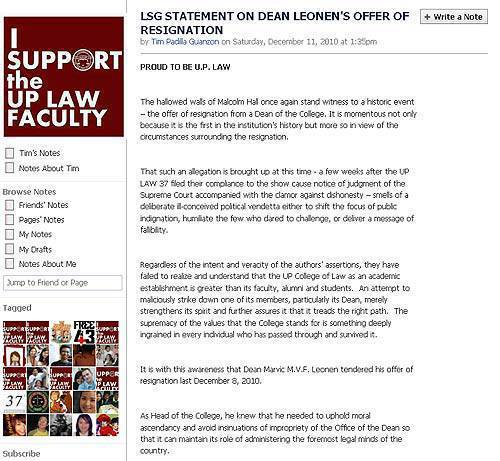 GMANews.tv reports that the UP Law Student Government (LSG) has released a statement over the weekend calling on the UP Board of Regents (BOR) to reject Leonen’s resignation letter.

According to the statement, LSG commends "Dean Leonen’s courageous and humble act" and calls "to those who have been plagued with allegations of dishonesty in the Supreme Court to vacate their positions in order to prevent compromising the revered name of the Highest Court of the Land." 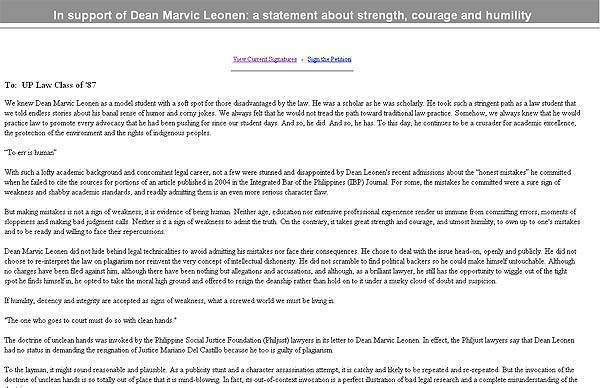 Screencap of the online petition by the UP Law Batch 1987

An online petition has also been made by the UP Law Batch 1987 to show support for Leonen. The petition reads: "But making mistakes is not a sign of weakness; it is evidence of being human. Neither age, education nor extensive professional experience render us immune from committing errors, moments of sloppiness and making bad judgment calls. Neither is it a sign of weakness to admit the truth. On the contrary, it takes great strength and courage, and utmost humility, to own up to one’s mistakes and to be ready and willing to face their repercussions." As of posting time, the online petition has 36 signatures.