UPDATED: 5 dead, 14 injured in bus explosion on EDSA near Buendia

An improvised explosive device triggered by a cellphone caused the explosion near the Buendia MRT station, presidential security adviser Cesar Garcia said, according to the AFP. "The fact that this has been established-that the device used was an improvised explosive device similar to the ones used by terrorist organizations in the southern Philippines-raises the possibility it was a terrorist attack." 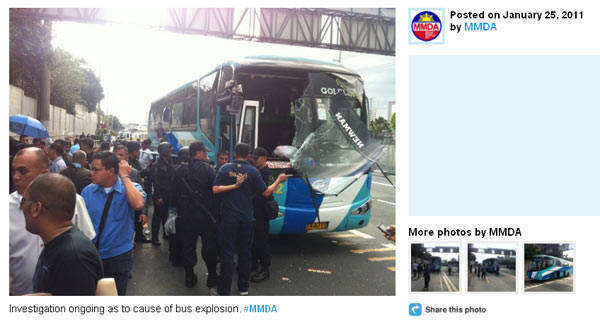 (Published January 25, 3 p.m.) Two people died and at least 17 were hurt when a bus exploded on the northbound lane of EDSA near the Buendia MRT station today, reports Inquirer.net. The cause of the blast is still unknown as of posting time. A bomb squad has been sent to the area where the Newman Gold Liner bus (plate number TXJ-710) exploded.

The MMDA Tweeted that the northbound lane from Ayala to Buendia has been closed off. Motorists are advised to take alternate routes.