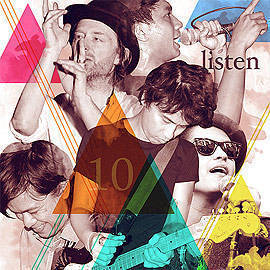 Update your iPod! Check out SPOT.ph's hot summer anthems for the month of March.

Start the summer with SPOT.ph's March playlist featuring 10 different tunes to complement the sunny days ahead.

These days, bands don't necessarily have to be made up of a group. Take for instance, Rez Toledo a.k.a. Somedaydream, a 20-year-old student makes music using his laptop in his free time. His song "Hey Dreamer" was an instant hit when it landed on the airwaves. Fresh and catchy, his electro-pop sound is something we haven't heard before-a refreshing tune to kick-off summer.

Fun fact: This isn't the duo’s first duet-the pair sang a song called "Skin and Bones" a few years ago.

"Dress and Tie" is available on iTunes.

From their new album Contra Tiempo comes "Lakad," a song about, you guessed it, walking. Like most Sandwich songs, it's catchy and it’s likely you'll be singing along and bobbing your head to the melody in no time. It's that type of song that'll make you want to walk straight into summer.

The all-female band is known for dishing out good old rock 'n roll tunes reminiscent of songs from legendary musicians like Sampaguita and the band Asin. "Tila," a single from their debut album, is a sure winner especially for true rock fans. And yes, Nicole, Caren, Bea, Audry, and Alex, are all hotties-they will definitely add sizzle to summer.

Song: "Am I Forgiven?"
Artist: Rumer

Sit back and relax as you listen to "Am I Forgiven," a track on Rumer's debut album Seasons of My Soul. Though the song could pass for a ditty from the 70's, its languid melody and straightforward treatment give it a fresh tone, very much different from how pop songs these days sound. Her voice has an uncanny similarity to Karen Carpenter's, so they say. Listen and be the judge.

Fun fact:  The 31-year-old singer-songwriter was born in Pakistan.

Seasons of My Soul is available in records stores nationwide.

Limiters of the Infinity Pool, Pupil's recently released album, lists a roster of amazing tunes. Our favorite is "20/20," a melodic tune that instantly captivates you with its infectious beat and lyrics. With music legend Ely Buendia at helm, how can you not love it?

Fun fact: Aside from being able to download Limiters of the Infinity Pool on iTunes and Amazon, Pupil will also release a vinyl version.

Limiters of the Infinity Pool is available in records stores nationwide.

Picture this: a white sand beach, clear blue water, the sun shining brightly, and this song playing in the background. "Love Love Love" has got a reggae beat that makes it totally perfect for the beach. Now the only thing lacking is a piña colada or an ice cold beer.

Fun fact: Early in her singing career, Hope busked on Hollywood Boulevard. Now she's singing with Jason Mraz-how’s that for a level up?

The heavy metal band known for poking fun at anything and everything (including themselves) has come up with a wonderful idea-they launched their latest album Makamundo on their website where you can download it for free. "Hipon," with its silly lyrics and serious guitars, makes one crazy summer anthem.

Fun fact: In exchange for downloading the band's album for free, they want you to help promote and support the band by posting their Facebook page and website on your Facebook wall and by going to their gigs. Catch Giniling Festival on March 23 at Tiendesitas.

Don't you wish you could lounge all day and do nothing? Well, Bruno Mars' "Lazy Song" from the Doo-Wops and Hooligans album will get you in the mood for just that. With lyrics like "Today I don't feel like doing anything, I just wanna lay in my bed" and an infectious beat, this tune can be in the running for your top summer song.

Fun fact: Bruno Mars is coming to the Philippines! He'll be performing at the Cebu Waterfront Hotel on April 7 and at the Araneta Coliseum in Manila on April 8.

Doo-Wops and Hooligans is available in records stores nationwide.

Fun fact: The British band is totally committed to reducing their carbon footprint. To go green, they once performed via satellite on Conan O' Brien's show so they woudn’t have to fly all the way to the U.S.

The King of Limbs is available for download here.