CHECK IT OUT: Chef Bruce Lim's Hyphy's at The Veranda, Robinsons Galleria
Loading
Already a member? Log in
No account yet? Create Account
Spot.ph is your one-stop urban lifestyle guide to the best of Manila. 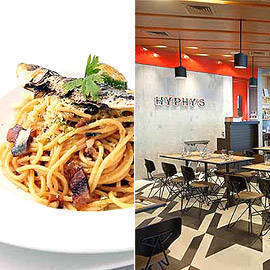 CHECK IT OUT: Chef Bruce Lim’s Hyphy’s at The Veranda, Robinsons Galleria 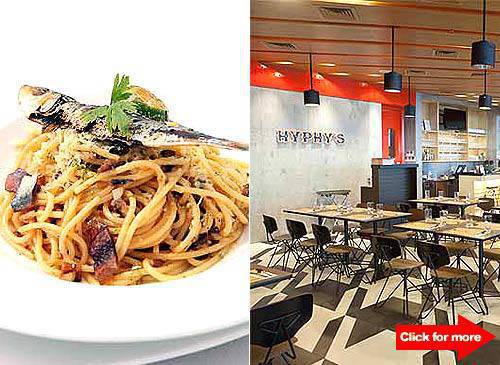 (SPOT.ph) Hyphy’s at The Veranda of Robinsons Galleria is all about comfort food, Fil-Am style. Says owner Chef Bruce Lim who also helms Chef’s Table at the Bonifacio Global City, "Hyphy’s is all about the stuff I used to eat when I was a kid, stuff that I couldn’t find here. It’s what food meant to me as a Filipino growing up in San Francisco."

True enough, having fun with food extends to some of the items on Hyphy’s menu like the Calamansi Tuyo Pasta (P130), salted fish-topped pasta cooked Aglio Olio-style with cheese and calamansi; Spam Masubi (P300), slices of ham with rice and egg are wrapped in seaweed and served with soy sauce; chico-flavored frozen yogurt and the Parol ng San Fernando frozen yogurt, Hyphy’s version of four seasons spiked with Tapuy or rice wine (P130).

"It’s so different from Chef’s Table, which is more refined," Lim said. "The food at Hyphy’s is a bit more playful. I don’t have to really listen to the rules and regulations of food. Hyphy’s is me. The fun side comes out."

Other crowd favorites include the Sisig Pasta (P170) and the Clam Chowder Sourdough Bread (P170), a creamy soup with a clam base made with milk, cream and the local lambanog served in sourdough that they bake themselves.

Lim shares that the name Hyphy’s was coined from the words "hyper" and "interactive" and admits that diners look at some of the items on the menu and tell him, "’What were you thinking? This is crazy!’ Lim said, "But that’s what Hyphy’s is all about, being hyper and crazy."

Lim also took elements of life in San Francisco to the interiors of Hyphy’s. "San Francisco has a lot of brick walls and borders," Lim adds, so one wall has skateboard decks made to look like bricks.