Kris swears off love, police to probe Jason Ivler's fan page + more lowlights
Loading
Already a member? Log in
No account yet? Create Account
Spot.ph is your one-stop urban lifestyle guide to the best of Manila. 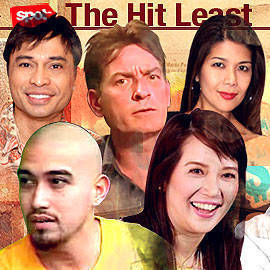 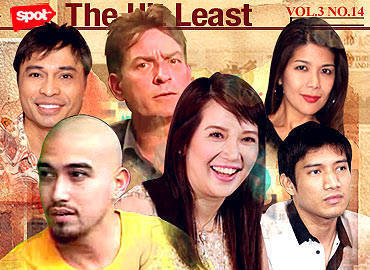 1. THE AMPATUANS, ALLEGED MASTERMINDS OF THE MAGUINDANAO MASSACRE, HAVE NOT YET BEEN ARRAIGNED. Meanwhile, killing 57 people took only a few hours.

2. REP. MIKEY ARROYO AND WIFE ANGELA ARE CHARGED WITH TAX EVASION FOR REPORTEDLY NOT PAYING THEIR DUES FROM 2004 TO 2009. Don’t worry, Mikey, Mommy will make this go away.

4. POLICE TO INVESTIGATE JASON IVLER’S FACEBOOK FAN PAGE. Facebook game in development: "Pulis-Pulisan," which allows the police to solve their cases by using the obsolete Poke button. (Poked by the police? The horror!)

5. COMEDIAN ARNEL IGNACIO FILES A COMPLAINT AGAINST CORRUPT COPS. Careful, Arnel, those cops may Poke you. (See #4 above.)

6. PEOPLE WALK OUT OF CHARLIE SHEEN’S LIVE SHOW IN DETROIT. If you’re stupid enough to pay $300 to see a crazy man do his thing in a show called The Violent Torpedo of Truth, then the joke’s on you.

7. GENEVA CRUZ POSES NUDE FOR PETA. Seems to be the default move for stars not as "shiny" as they once were...(But we still love you for "Paraiso," Geneva.)

8. U.S. GOVERNMENT GIVES BACK $132,000 TO THE PHILIPPINES, SUPPOSEDLY FROM THE FORFEITED ASSETS OF ERLINDA LIGOT. That’s probably chump change to her.

9. WHEN ASKED ABOUT HER LOVE LIFE, KRIS AQUINO REPLIES, "NEVER AGAIN." That’s like a Filipino saying, "I have never eaten rice."

10. ALJUR ABRENICA SAYS HE’S READY FOR "SEXIER ROLES." Dude, you were near-naked in Machete five times a week, but the show was over in just three months. (Spend less time at the gym and go to acting workshops, please. It’s not too late for you.)

Hitleast Hitleast Charliesheen Jasonivler Jamesyap Kris Aquino Arnelignacio
Your Guide to Thriving in This Strange New World
Staying
In? What to watch, what to eat, and where to shop from home
OR
Heading
Out? What you need to know to stay safe when heading out