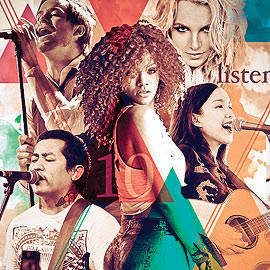 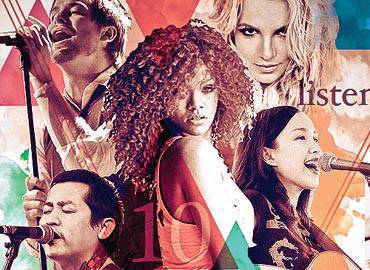 (SPOT.ph) This month, our playlist includes a cool instrumental from a group of local music gods, a "message" from rock band Urbandub, and LSS-worthy pop songs from some of the biggest international stars.  Plus, a sneak peek from Barbie Almalbis’ new album!

Barbie's back with a brand new album and a single that will move you. After a four year hiatus (she got hitched and had kids), the talented singer-songwriter releases "Goodbye My Shadow," a touching tune that pays tribute to the Almighty. It's a non-cheesy pop-rock ditty that showcases a fresh new sound yet is still very distinctly Barbie.

What do you get when two of the biggest pop stars merge? A kick-ass tune made even better. Officially released online, this remixed version of Rihanna's controversial tune "S & M" features pop princess Britney Spears. With lyrics like, "I may be bad but am perfectly good at it" you'd think the song was tailor-made for Brit. Pop this in your player and you'll be grooving in no time.

In a mini-concert held last month, local rock gods Urbandub played their newest track "Sending a Message," a stirring song that pays homage to the band’s fans and clearly states the band is here to stay, especially after many local band break ups. Strong both lyrically and musically, this catchy song has the makings of your next LSS. We can't wait for the full album to be released.

Come June, American Idol winner David Cook will finally release his sophomore album titled This Loud Morning. Rock out to his latest tune, "The Last Goodbye." Though the lyrics are on the sad side, the song's melody remains upbeat and Cook's strong vocal shines.

Fun fact: This American Idol’s good luck charm is the tattoo on his left arm.

From their latest all-original album Hit the Ground Running comes "Express Highway," a catchy song that flaunts a fresher sound from the boys. Known for performances and songs inspired by the good ol’ 60s, The Bloomfields introduce an edgier, more mature tone that fits them perfectly. Get inspired to hit the road for that one last hurrah before summer ends.

Fun fact: Discovered by a radio station, The Bloomfields picked up their band name from a street in L.A. named "Bloomfield."

Known for their funny lyrics, Tanya Markova is one of the most talented local bands today. After dancing and singing along to hits like "Picture Picture," "Linda Blair," and "Disney," you'll definitely do the same with "P.A. Roadie Fernandez." It's an easy listening tune perfect for fun times.

Okay, so we can't understand most of what they're singing but who cares? "Love Song," by K-pop group Big Bang, is addicting, especially when you watch the black and white music video starring the hotties. Heat up your summer with this song and learn the fun dance steps while you’re at it.

Fun fact: Andre Frauenstein, a top South African DJ and music producer, started DJ-ing when he was only 13 years old.

A musical suite by the some of the most talented and most respected artists in the music industry, Humanfolk is composed of Johnny Alegre, Susie Ibarra, Roberto Juan Rodriquez, Cynthia Alexander, Abby Clutario, and Malek Lopez. Their music is an interesting mix of indigenous Philippine elements laced with electronica and Southeast Asian sounds. This instrumental track will definitely put you in a chill state and open your ears to good music.

Fun fact: Humanfolk's Susie Ibarra is not only a legend in the Philippine music scene, she's also well known in the international scene having performed with artists such as Sean Lennon, Sonic Youth's Thurston Moore, and Yo La Tengo among others.

Song: "That Should Be Me"
Artist: Justin Bieber featuring the Rascal Flatts

Catch the Bieber fever with this slow ballad-like tune from the young pop phenomenon. Singing alongside American country superstars Rascal Flatts, it looks like Bieber's matured a whole lot, new haircut and all. Finally, a song that really highlights the 17-year-old's voice.

Fun fact: Justin Bieber performs in Manila on May 10 at the Mall of Asia concert grounds. Get your tickets here.