Bus driver in journalist Chit Estella's killing hiding in Taytay, says MMDA
Loading
Already a member? Log in
No account yet? Create Account
Spot.ph is your one-stop urban lifestyle guide to the best of Manila.

The MMDA believes that the driver Daniel Espinosa is hiding in Taytay, Rizal, where he resides. On radio dzXL, Tolentino appealed to Espinosa’s family and friends to provide information about the suspect’s whereabouts. It was reported yesterday that the MMDA has offered a P100,000 reward for information that could lead to the arrest of Espinosa.

ABS-CBN News reports that the Quezon City Police District will file charges of reckless imprudence resulting to damage to property and homicide against Espinosa today, and will seek a warrant for his arrest.

On Friday, Simbulan died after the Guiding Star passenger bus that Espinosa was driving rammed into the taxi that Simbulan was riding, reports Inquirer.net. Another bus nicked the taxi before the fatal collision, police said. The incident took place along Commonwealth Avenue in Quezon City, which is known as a "killer highway" because of the numerous fatal accidents involving speeding vehicles that has occurred there, reports ABS-CBN News. 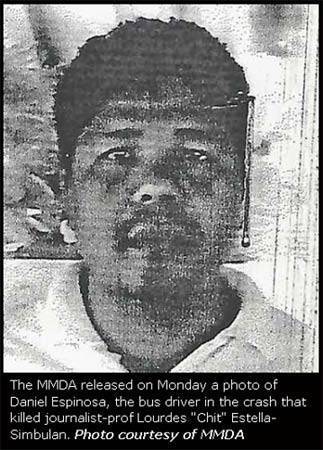 The Universal Guiding Star bus line operations have been suspended but at least four of its units were caught plying its routes today, reports GMA News Online. The apprehended drivers received traffic violation tickets, and one of them said the company does not have a copy of the suspension order yet.

Following Simbulan’s death, the MMDA is considering scrapping its no-contact policy that it started implementing in January, reports GMA News Online. Under the policy, the MMDA issues notices to over-speeding vehicles caught by CCTV cameras.

Simbulan was 54 when she died, reports Vera Files. According to Inquirer.net, the award-winning investigative journalist also taught at the UP College of Mass Communication. She was a founding member of the independent Vera Files, former managing editor of the Manila Times and former Philippine Daily Inquirer desk editor, among others.

Author Benjamin Pimentel wrote in an Inquirer.net article, "She represented the best. And her death was a major blow to the profession, to reporters, editors, broadcasters, publishers and writers who believed in journalism with integrity."

For more on this story, log on to  GMA News Online, ABS-CBN News and Inquirer.net.

Chit Simbulan Chitestella Lourdeschitestellasimbulan Journalist Busaccident
Your Guide to Thriving in This Strange New World
Staying
In? What to watch, what to eat, and where to shop from home
OR
Heading
Out? What you need to know to stay safe when heading out