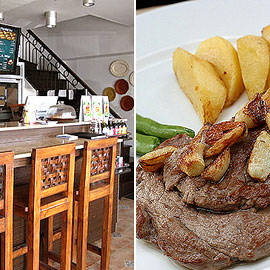 CHECK IT OUT: Casa Marcos

The old restaurant known for steaks and Spanish fare is reborn at the Forbestown Strip, Burgos Circle. 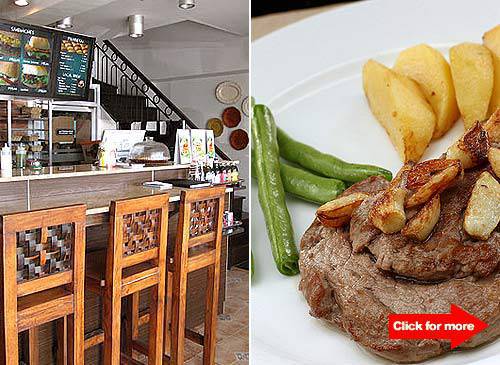 Enjoy steaks, gambas and more at the new Casa Marcos. Click for more.

Once the most "happening" Spanish restaurant along Roxas Boulevard known for steaks, gambas, paella and other Castillan fare, Casa Marcos is making a comeback in the dining scene at a new Burgos Circle location.

The old Casa Marcos has had a loyal following since the 1940s, shares Jigger Galvez, owner of the "new" Casa Marcos. Galvez’s grandfather, Ben del Rosario, was one of the many patrons of the popular Spanish restaurant at the time. Del Rosario was also close to the owner, Marcos de Guisasola, who sold the restaurant to him when he returned to Spain. Before the restaurant closed its doors in 2000, Casa Marcos did a lot of moving-from Roxas Boulevard to Tomas Morato in Quezon City,  and eventually to Gilmore in San Juan.

Those who remember the cuisine of Casa Marcos will feel right at home in the new branch, albeit at a much smaller space than the 1940s hotspot. "We kept the bestsellers like the Casa Marcos steak, almejas (clams), gambas, caldereta, snipes and the paella. The original menu was a longer one, it had a breakfast menu and a Filipino menu. We kept the Spanish dishes on the menu," Galvez said.

"The feedback I get from customers, so far, is that it still feels the same. But we added the Bread Bag component," added Galvez. Bread Bag's sandwiches, pan de plato meals and desserts may also be ordered at Casa Marcos. Come dusk, Casa Marcos becomes a tapas bar with red and white wines, sparkling wines, rose, and grappa which may be paired with gambas and tapang usa.

Casa Marcos Breadbag Spanishfood
Your Guide to Thriving in This Strange New World
Staying
In? What to watch, what to eat, and where to shop from home
OR
Heading
Out? What you need to know to stay safe when heading out