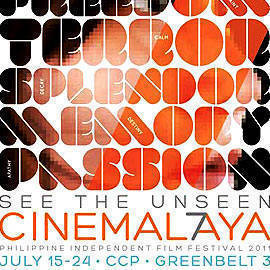 The reel deal: get the lowdown on this year’s must-see flicks.

(SPOT.ph) The indie-mand film festival is back with bolder, more riveting, and socially relevant flicks from both seasoned and emerging filmmakers. Now on its seventh year, Cinemalaya 2011 will run from July 15 to 24 at the Cultural Center of the Philippines and from July 16 to 24 at Greenbelt 3 Cinemas 3 and 5. "See the Unseen" is this year’s theme, and the festival will feature films that focus on passion, memory, truth, despair, obsession, terror. 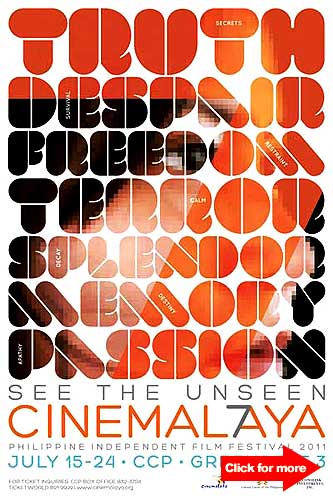 To see the screening schedule and film synopses, click for more.

Quark Henares' Rakenrol premieres in Manila via Cinemalaya on July 23 at CCP. The Cinemalaya Awards Night is on July 24, 7 p.m. at the same venue.

Aside from the lineup of Cinemalaya films, Focus Asia will feature eight independent films by directors from Korea, Thailand, Malaysia, Indonesia, China, Vietnam, Singapore, and Japan. The Ronwaldo Reyes Retrospective will highlight the directorial works of National Artist Fernando Poe Jr. Documentaries on the different aspects of Philippine society will be presented in the Cinemalaya Documetary section. Other sections of Cinemalaya include the NETPAC Philippine Premieres with eight competing films, Ani featuring the best Filipino indie films from the past year, Kids Treats presenting indie films for kids, and Midnight Specials with adult-themed indie works.

Cinemalaya has also organized the Cinemalaya Film Congress with events like forums, lectures, and exhibits.