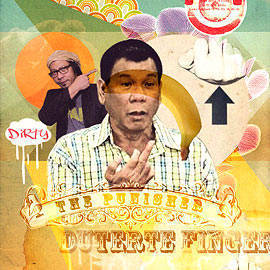 Our SPOT.ph blogger on the dirty, dastardly Duterte finger and what it really means. 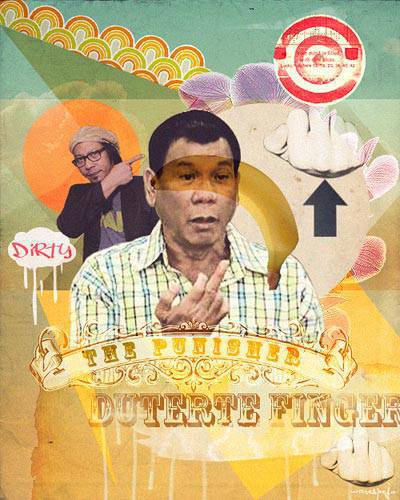 Television blurs it. But why? It's just a finger, although of all the five digits, it is the biggest and the fattest- if proximity to malice is to be discussed, it is the most phallic in shape. But so do the eggplant and the German frankfurter. Why aren't we blurring certain hotdog commercials then? Although we did take down the Bench billboard with the rugby players with the Titanic bukol-lychees.

We're talking about the dirty finger a.k.a the one-finger salute, flipping the bird, or in our language, ngarat, ngatngat, or, according to some grade-schoolers, "pakyu." And based on recent events, the "Duterte Finger." Of course, the TV networks had to blur it, the way they blur footage of bloody corpses, nipple slips, ass cracks, the faces of minors, rape victims, witnesses to high-profile crimes, and cleavage (in the perplexingly absurd case of Giselle Sanchez on UNTV).

Is it the intent, the malice behind it? I do not think so. Did we see the networks bleeping Osama Bin Laden's pronouncements about destroying the Great Satan America? That's about the most nefarious and most obscene threat anyone could ever utter in media. But did they bleep him? No.

Why blur the finger on TV?  We all know what's behind those pixels. And- again-it's just a goddamned finger. Yes, we all know how this one finger can offend certain sensibilities. But, really, can a lump of pixels really make us forget what's behind it?

Don't get me wrong. The Finger remains socially unacceptable. But so were alcohol, homosexuality, and women's suffrage for a time. It's just one finger, but it manages to convey an entire spectrum of negative emotions, expressing with literally a single flick of a finger what five well-constructed sentences with multiple exclamation points cannot convey. In the streets of Metro Manila where traffic can easily inflame tempers,  it's the most convenient means of expressing your dismay without having to scream yourself hoarse. It transcends physical distance. All you have to do is roll down your window, extend your arm and kaboom! Cars with sunroofs are an absurdity in Philippine clime, but at least they're perfect for a vertical-style one-finger salute.

Before Duterte, the most famous dirty finger belonged to Teddy Boy Locsin, my idol. That finger has been immortalized in a Manila Chronicle photograph published 26 years ago. I was only ten then. There he was, baby-faced, in a spiffy suit, and flipping the bird to striking San Miguel Corporation workers. I said to myself that one day this man would be my boss, and lo and behold, he did. I worked for him for six years, in a newspaper for which he wrote coruscating editorials with titles like "Shut up, Vistan" and endearing phrases like "Rafael Alunan- the only Ramos cabinet member who does not resemble a hemorrhoid." I remain in awe of the man. When he screamed, "You sons of bitches!" at the Smartmatic people during the elections last year, I knew I had made the right career decision.

For Teddy Boy's gesture Larry Henares sang praises: "We should be eternally thankful that Teddy Boy Locsin in his official capacity as Press Secretary, brought into the open, on the front page no less for all the world to see, a "dirty finger" that is as uniquely Filipino as the yo-yo, the moon buggy, the barong, and 'Dahil sa Iyo,' much better than the American version."

The Commission on Human Rights reacts to "Duterte Finger"

The origin of this hand gesture is said to go all the way back to Ancient Greece, according to a New York Times article, "Has the Finger Lost Its Taboo?", even citing a reference in Aristophanes' The Clouds. Another online source provides what sounds like an urban myth regarding its birth. In the Battle of Agincourt in 1415, the French had threatened to cut off the English's middle fingers- the ones they use for pulling the string in their dreaded crossbow. But surprise, surprise: the French were defeated and as they retreated, the English proudly flashed their still-intact fingers. Another story has it that the phrase "flipping the bird": it was said that they used pheasant feathers for their arrows.

The NYT article asks, "But when the finger does the talking, what are we communicating? (Don't all shout the answer at once.) Disdain, frustration, rage? Yes to each, the professor said. Then there's insult. Vulgarity. Puckish collegiality."

The article adds, "And inherent defiance" and goes on to share a charming anecdote: "In 1968, North Korea seized the U.S.S. Pueblo and released a photograph of captive sailors, some of whom displayed middle fingers. The sailors told the North Koreans it was a Hawaiian good luck sign. When the North Koreans learned the truth, the Americans were beaten."

And speaking of beatings, back to our favorite family of the moment. I can imagine them at the dinner table, the good mayor teaching the son and the daughter the finer points of governance, leadership, discipline, the importance of Draconian virtues, and self-expression via hand gestures.

Which brings us to the recent subject of dirty fingers. We all saw the Duterte Finger last week. That plus the spate of recent events drew swarms of criticism from human rights activists, or what Vice-Mayor and Daddy Rody Duterte called "kayong mga bleeding hearts diyan." That finger- though pixelated on the primetime news- and the image of his daughter Sara socking the sheriff elicited such protests. But the Davaoeños seem to love the Dutertes. When howls exploded in the hyper-shrill biosphere of social media, the Dutertes' first defenders were the denizens of Davao City themselves. "Hindi nga nananapak yung mayor niyo," went the typical defense, "pero tingnan niyo naman yung siyudad niyo!" Davaoeños are mighty proud of their city- the peace and order, the impressively low crime rate, and the continuing economic boom. Davao was 19th  on Asiaweek's list of 40 Most Liveable Cities in 1998. Maybe they should put a big fat middle finger on the official city seal. As if to say to the visitor, "F-k all your smiling and polite local government officials. Come and we'll show you how to run a city." Death squads? Fight fire with fire- along with the one-finger salute and some choice cuss words no less.

Frankly, I prefer that to hypocritical mayors who beam at you from their massively Photoshopped tarpaulins while you stand on a filthy street corner festering with uncollected garbage. Then you survey the rest of your surroundings- the noise, the smoke, clogged drainage, the stray dogs, the cracked pavement, the atmosphere of dread where you feel like someone's about to snatch your bag or stab you anytime, and you ask yourself, "What the hell am I paying taxes for?"  Now that’s one real, big, fat dirty finger pointed right at your very nose.

Lourd Middlefinger Duterte Davao
Your Guide to Thriving in This Strange New World
Staying
In? What to watch, what to eat, and where to shop from home
OR
Heading
Out? What you need to know to stay safe when heading out