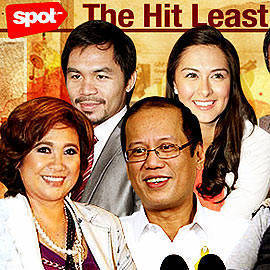 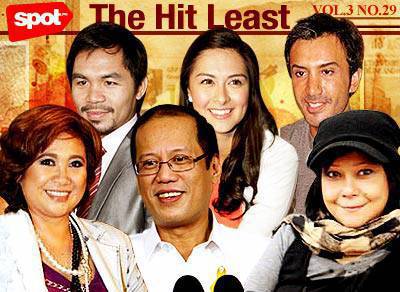 3. SUSPENDED ARMM GOVERNOR ZALDY AMPATUAN NAMES POLL FRAUD CULPRITS. When a massacre suspect is your best bet, you’re screwed any which way you look at it.

4. J.LO AND MARC ANTHONY BREAK UP AFTER SEVEN YEARS. Because no one leaves Dayanara Torres and gets away with it.

5. P-NOY TALKS ABOUT ECONOMICS. This video is now known as the "Best Cure for Insomnia."

6. RUFFA GUTIERREZ’S EX, YILMAZ BEKTAS, IS BACK ON THE SCENE. He’s probably the only man alive who’s not afraid of Annabelle Rama-maybe because whatever she says to him is lost in translation...

9. NORA AUNOR FAILS TO COME HOME...AGAIN. Her mole was booked on a different flight and she had to go after it.