(SPOT.ph) Though police have kept mum on the possible causes of 27-year-old singer Amy Winehouse's death, sources believe the singer died from a mix of ecstasy and alcohol, reports PEP.ph. Winehouse was found dead in her London apartment on July 23.

An unnamed friend of Winehouse told Sunday Mirror, "She has spent the last seven days on a massive bender and people were saying she’s going to drink herself to death. MTV producer Danny Panthaki confirmed the news. "My friend’s boyfriend is a policeman and he’s the one who found Amy Winehouse dead. Overdosed on ecstasy," he said. London authorities, however, maintained that it was inappropriate to speculate about the cause of death since no post mortem has taken place yet. In a Rolling Stone article, police have described her death as "unexplained."

Meanwhile, family and friends have been lamenting the singer's sudden demise. "This isn't real. I'm completely devastated. I'm getting (on) the next plane back. I'm coming home. I have to be with Amy," said Winehouse's father, Mitch, who was in New York for a jazz performance. Her mom, Janis, however, saw Winehouse the day before she died. "She seemed out if it but her passing so suddenly still hasn’t hit me. Amy always said ’I love you mum’ when we would say goodbye. They are the words I will always treasure. I’m glad I saw her when I did."

Winehouse's former mother-in-law, Georgette Fielder-Civil, worries that her son, Blake Fielder-Civil, will "kill himself" upon learning about his ex-wife's death. The couple divorced in 2009 and Blake is currently serving 32 months in prison for burglary and possession of an imitation firearm. "Blake will kill himself. He won’t make it without her. He will be devastated, totally and utterly devastated. He’ll go straight back to self-harming. I’ll have to ring the prison and he’ll have to be put on watch," Georgette told the Daily Star on Sunday, adding that her son had wanted to get back together with Winehouse.

For more on this story, log on to PEP.ph, Sunday Mirror, Daily Star, and Rolling Stone. 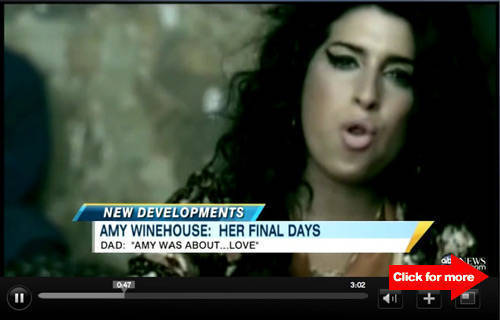 Amy Winehouse Dies Ecstasyoverdose Winehousefriendsandrelatives
Your Guide to Thriving in This Strange New World
Staying
In? What to watch, what to eat, and where to shop from home
OR
Heading
Out? What you need to know to stay safe when heading out