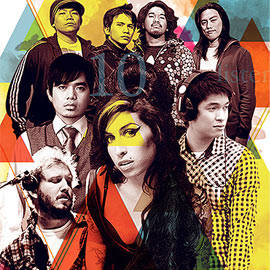 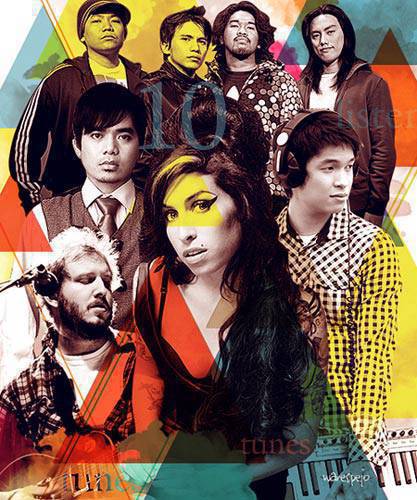 Song: "All I Wanna Be"
Artist: LICA featuring Richard Poon

Another Pinay catches the international music scene's attention with her immense vocal talent. 14-year-old Lica de Guzman, who was personally chosen and trained by Phil Collins, joins crooner Richard Poon for a powerful ballad. Her strong angelic voice gets us excited about what she’ll sing next. Could she be the next Charice?

Fun Fact: At such a young age, the Switzerland-based teen has already performed onstage with and Phil Collins and Bryan Adams (talk about world class!).

It's not often you come across a band like Goodleaf. Frontlining the local dub music movement, their sound is a nice mix of reggae, down tempo, and electronica (this tune is a perfect example). Not exactly mainstream material, their music is unique and trippy-the kind that’s a real treat to listen to.

British DJ, guitarist, and music producer Mark Ronson's funky collab with Amy Winehouse is an infectious jazzy tune. It features the soul icon’s effortlessly powerful vocal and a non-cheesy rap bit. Too bad the talented artist had to go too soon.

Fun Fact: During a tribute to Amy Winehouse, Ronson opened the show with this song and invited the song’s original author Dave McCabe of The Zutons onstage. Ronson also praised his friend during the show saying, "She made brilliant music, more than I’ll make in my entire life."

The popular Pinoy rock band slows things down with "Regal," a ballad that packs a meaningful message. Deep and moving, it can  make any woman feel like a queen, especially when it’s sung by Yael.

Fun Fact: The band has been around for nearly 10 years; they’ve won numerous awards and have close to two hundred thousand Facebook fan page likes.

Launched just this year and Somedaydream has already gained a huge following. After the success of his first single "Hey Daydreamer," he brings us "Delivery Boys," another electro-pop tune that showcases the kid's so-fresh sound.

Fun Fact: Rez Toledo a.k.a Somedaydream writes and records his music from his room with the help of laptops and synthesizers. He's got close to 29 thousand likes on his Facebook fan page.

Beautiful and brilliant, Bon Iver's "Holocene" is one heartfelt tune with words sung so movingly by indie-folk singer Justin Vernon. Highly acclaimed by music critics, Vernon's effortless falsetto complemented by the subdued melody of this song is pure genius.

This easy listening pick is from an indie-pop under-the-radar band. We love how their fresh, raw sound can instantly make you feel warm and fuzzy.

Fun Fact: "Morning Face" was included in a demo released by the band this year.

Fun Fact: First shown in Cinemalaya (it was one of the closing films this year), Zombadings hits theaters on August 31.

If you like Sheryl Crow, you'll adore Colbie Caillat. The Malibu-born singer-songwriter's latest single from her newly released album All of You, is a sunny song that can brighten up even the gloomiest day. Cutesy lyrics and an infectious beat make this the perfect get-happy ditty.

Fun Fact: The 26-year-old has been nominated numerous times and has won a Grammy for her collaboration with Jason Mraz.

Believe it or not, this rap song is about our national hero, Jose Rizal. "Kung Tama Siya" is Gloc 9's contribution to the Rizal tribute album Rock Rizal. The tune opens softly with a Spanish guitar-style melody then turns into a strong song with heavy words. Noone better to get the message across than Gloc 9.

10 Tunes To Listen To This Month Augustplaylist Spongecola Markronson Amywinehouse Boniver Goodleaf Dubpilipinas Somedaydream Deliveryboys Naibanggabi Holocene Zombadingsthemesong Rockrizal Gloc9 Bee Eyes
Your Guide to Thriving in This Strange New World
Staying
In? What to watch, what to eat, and where to shop from home
OR
Heading
Out? What you need to know to stay safe when heading out