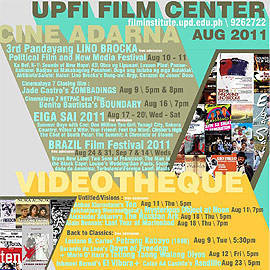 What’s Happening at the UPFI Film Center This August

Over at Cine Adarna, catch the 3rd Pandayang Lino Brocka Political Film and New Media Festival on August 10 and 11. Aside from the political film and documentary screenings, the two-day affair includes a workshop, exhibit, forum, and book launch. Also, don't miss Netpac Best Film Winner, Benito Bautista's Boundary on August 16 as part of Cinemalaya Goes UP 7.

Those who missed Eiga Sai 2011 can catch its UP run from August 17 to 20. Films include: Summer Days with Coo; One Million Yen Girl;  Yunagi City, Sakura Country; Villon’s Wife; Your Friend; Feel the Wind; Climber’s High; The Chef of South Polar; and The Summit: A Chronicle of Stones. 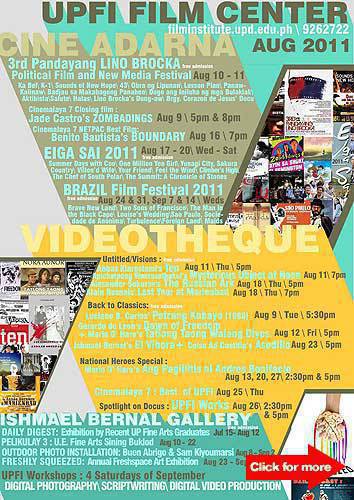 More film screenings are happening at Videotheque this month, too, with their Back to Classics selections featuring Luciano B. Carlos' Petrang Kabayo (1988) on August 9, Gerardo de Leon's Dawn of Freedom and Mario O' Hara's Tatlong Taong Walang Diyos on August 12, and Ishmael Bernal's El Vibora and Celso Ad Castillo's Asedillo on August 23.

More quality foreign flicks are in their Untitled/Visions lineup like Abbas Kiarostami’s Ten and Apichatpong Weerasethakul's Mysterious Object at Noon on August 11, as well as Alexander Sokurov’s The Russian Ark and Alain Resnais’ Last Year at Marienbad on August 18.

To celebrate National Heroes Month, there will be a special screening of Mario O' Hara's Ang Paglilitis ni Andres Bonifacio on August 13, 20, and 27.

A selection of outstanding student films takes up Cinemelaya Goes UP 7’s Best of UPFI special on August 25. This month’s Spotlight on Docus on August 26 also features UPFI works.

Up Film Center Cineadarna 3rdpandayanglinobrockapoliticalfilmandnewmediafestival Eigasai2011 Brazilfilmfestival2011 Updiliman Moviesinmanila Filmfestivalsinmanila
Your Guide to Thriving in This Strange New World
Staying
In? What to watch, what to eat, and where to shop from home
OR
Heading
Out? What you need to know to stay safe when heading out