Islamic cleric allegedly bans women from touching "sexually suggestive" food such as cucumbers; Egyptian news site apologizes for "unve
Loading
Already a member? Log in
No account yet? Create Account
Spot.ph is your one-stop urban lifestyle guide to the best of Manila. 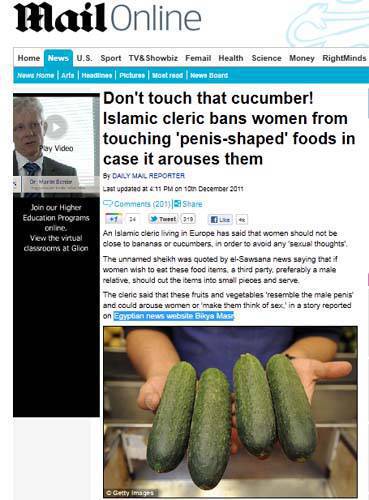 (SPOT.ph) On December 6, Egyptian news website Bikyamasr.com posted the story titled, "Islamic cleric bans women from touching bananas, cucumbers for sexual resemblance." The article alleged: "An Islamic cleric residing in Europe said that women should not be close to bananas or cucumbers, in order to avoid any ’sexual thoughts.’" Carrots and zucchini were also on the list. The cleric even suggested that the food should be cut up in a hidden place so women can’t see them.

The Bikyamasr.com article was actually citing a report written in Arabic, which had been posted on Assawsana.com. The said cleric was not named in the story. His exact location was not revealed either.

Despite the "unverified" information, other websites such as UK’s The Daily Mail Online (see screenshot accompanying this feed) picked up and ran their own versions of the story. (Do a Google search using the term "cucumber cleric" and you’ll see what we mean.)

However, Bikya Masr was soon hit by critics for publishing the story. As a follow-up to the controversial article, Bikyamasr.com posted "Cucumber sheikh ’far from the truth,’ says Egypt Islamic leader" on December 10. The article cited Islamic scholar and chairman at Egypt's Religious Endowments Ministry Sheikh Gaber Taye' Youssef who had doubts about the "cucumber cleric" story’s veracity. Youssef pointed out: "Nonesense and wrong, such talk is empty of any logic or sense and has no roots or relations with Islam or its belief system. I don't think any reasonable scholar or sheikh who was educated at al-Azhar or any other grand and respected institution would think of such a thing and voice it as a fatwa for people."

By December 11, Bikyamasr.com’s editor-in-chief Joseph Mayton posted an editorial, wherein he apologized for the sites coverage of the "cucumber cleric" story. He wrote: "Looking back, it was my own editorial oversight that failed in allowing this story to be published. Editorially, it was my duty to not publish this story before we could gather independent verification about the details behind the original Arabic article from Assawsana.com, the article that we referenced in writing our piece." He added, "Arguably, (the December 6 article) should not have been run at all. We should not have published about an ’unnamed sheikh’ in an unnamed European country unless we were able to garner more information on the issue, both on the sheikh himself and the news website the information was gathered from, independently."

Mayton also pointed out: "While the exact quote reported by Assawsana.com may well have been exactly what it was reported to be by that website, without a name and location behind this person and comment, it is difficult to find the information credible."

For more on this story, log on to Bikyamasr.com.

Cucumber Cleric Islamiccleric
Your Guide to Thriving in This Strange New World
Staying
In? What to watch, what to eat, and where to shop from home
OR
Heading
Out? What you need to know to stay safe when heading out