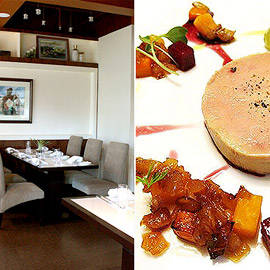 CHECK IT OUT: La Girolle at The Fort

Get to know French food with their tasting menus. 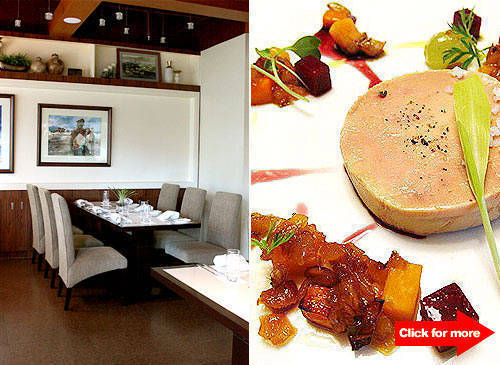 French fare without the snobby air. Click for more.

(SPOT.ph) For some, dining in Manila has become less about making a trip to the mall for its restaurant outlets and more about hitting less crowded dining haunts for inspired culinary adventures. If you're part of this adventurous pack, then a trip to La Girolle at The Fort is in order.

Even with its non-descript signage and a hard-to-find location, La Girolle gets its share of foodies curious about a new French food spot that has an ever-changing menu. At the helm of La Girolle's kitchen is Chef Ian Padilla, a New England Culinary Institute alum who also spent time in Paris's Michelin-rated Le Restaurant Taillevent.

La Girolle, which means "the chanterelle," opened in October 2011. The 30-seater restaurant has an open kitchen in full view of the dining crowd and a private dining area for eight people dubbed "Chef's Table." The restaurant’s minimalist interiors, with only paintings and prints hanging on the walls and simple light fixtures, provide little fanfare, and is a sharp contrast to the thoughtful plating of Chef Ian’s dishes.

Because the menu changes every few weeks, one might not find the same dishes on a second trip. Chef Ian has made the exception, however, for menu mainstays such as the Caramelized Lemon Tart and the 48-Hour Sous Vide Short Ribs of Beef (P1,200, a la carte) which he says is La Girolle's signature dish. The slow-cooked beef is crowned with shallot confit, creamed watercress and béarnaise beignets and has been the reason for plenty of return trips to La Girolle. Chef Ian, who used to be a vegetarian, also accommodates requests for no-meat meal options. La Girolle's kitchen uses local ingredients as much as possible and they use classic techniques in cooking, including creating sauces from scratch. Says Chef Ian, "The food on the plate will never lie."

La Girolle At The Fort Lagirolle French Food
Your Guide to Thriving in This Strange New World
Staying
In? What to watch, what to eat, and where to shop from home
OR
Heading
Out? What you need to know to stay safe when heading out