UPDATED: DBM owns up to big mistake, Sen. Bong Revilla did not get P210 million in 2011; DBM blames "system bug
Loading
Already a member? Log in
No account yet? Create Account
Spot.ph is your one-stop urban lifestyle guide to the best of Manila.

UPDATED: DBM owns up to big mistake, Sen. Bong Revilla did not get P210 million in 2011; DBM blames "system bug

ABS-CBNNews.com, citing a Department of Budget and Management (DBM) report, reveals that Senator Ramon "Bong" Revilla Jr. got "the largest amount of pork barrel funds in 2011 among the 307 members of Congress." The DBM released a total of P210 million to Revilla last year.

(UPDATED - Wednesday, Janaury 4, 8:11 p.m.) ABS-CBNNews.com, citing a Department of Budget and Management (DBM) report, had revealed that Senator Ramon "Bong" Revilla Jr. got "the largest amount of pork barrel funds in 2011 among the 307 members of Congress." The DBM claimed that they released a total of P210 million to Revilla last year. That figure turned out to be completely wrong. (Check out the screenshot of article featuring the DBM’s so-called "glitch" below.)

Interaksyon.com reports that the DBM admitted on Wednesday, January 4, "that it erred in its report on the amount that was allocated for Senator Ramon "Bong" Revilla Jr.’s Priority Development Assistance Fund (PDAF) more popularly known as pork barrel."

The report noted: "DBM Secretary Florencio "Butch" Abad said that due to a technical glitch, the agency inflated Revilla’s PDAF by P110 million. The senator only received P100 million and not P210 million as reflected in the record of the DBM. The glitch had something to do with the uploading module for the DBM’s eTAILS   (Electronic Transparency and Accountability Initiative for Lump Sum Funds), which erroneously replicated a single project listed in Revilla's PDAF."

In the ABS-CBNNews.com report, the DBM had gone on to list the PDAF allocations of the rest of the senators. Hopefully, the facts and figures that follow aren’t "glitched" as well.

According to the report, "Senators Joker Arroyo, Panfilo Lacson, and Sergio Osmeña III have not been touching their annual PDAF allocations." Meanwhile, resigned Sen. Juan Miguel Zubiri "did not receive any PDAF release in 2011 although in 2010, his releases totaled P41.9 million."

ABS-CBNNews.com added that the DBM "released a total of P19.5 billion in PDAF funds to senators and congressmen last year." 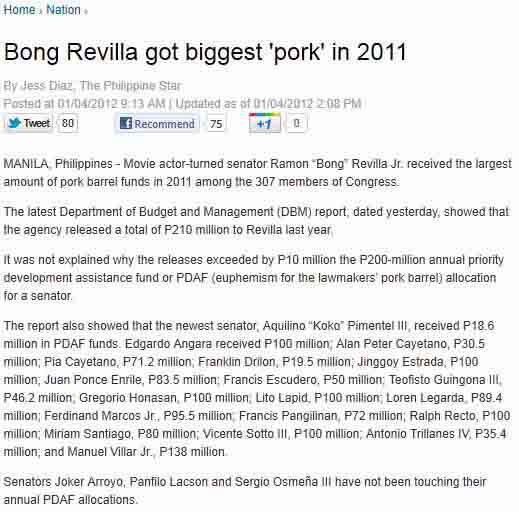 Here’s a screenshot of the article quoting what turned out to be a "glitched" Department of Budget and Management report. The media gets flak if they make factual errors, but what happens when a government agency makes a huge mistake? Should an, "Oooopps, sorry" be enough?

Bong Revilla Senate Dbm
Your Guide to Thriving in This Strange New World
Staying
In? What to watch, what to eat, and where to shop from home
OR
Heading
Out? What you need to know to stay safe when heading out