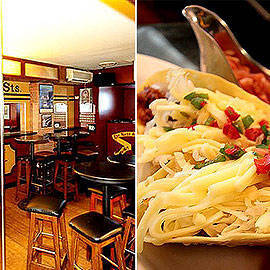 CHECK IT OUT: Cable Car at Arnaiz Avenue, Makati City

We rediscover a newly refurbished oldie...and find that it’s still a goodie. 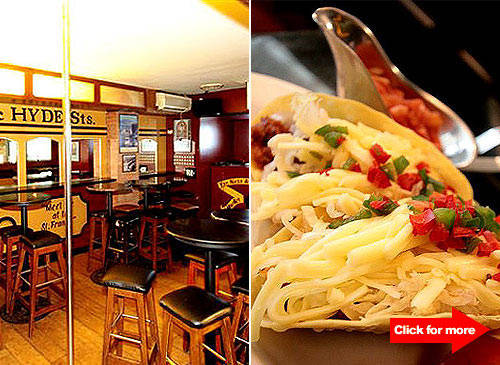 During its heyday in the 90s, Cable Car had franchises in Alabang, Eastwood, Streetlife, and the original pub along Arnaiz Avenue. Fast forward to the tail-end of last decade, when seven yuppies decided to ’Relive the Old Days’ by purchasing the last Cable Car left standing and fulfilling their lifelong dream of owning their own bar.

They moved to a new address in 2011, allowing them to expand their cozy pub with European undertones to four themed sections: Beer Pong (according to part-owner Paolo Olbes, their biggest claim to fame), Videoke, Terrace and The Pub. They also have an all-day restaurant menu; expect intense flavors and large portions. A fan favorite is the Cable Car Rice (small P200, large P350), stir fried rice with chicken adobo bits and topped with a scrambled egg-a simple-sounding recipe, but one that’s been a closely-guarded secret for 20 years.

Foodies will love the crunchy Tacos (P210), generously heaped with cheese and bell peppers and served with freshly made salsa. For serious meat cravings, the Junior Gripman’s (P210), a huge serving of burger and fries with Thousand Island dipping sauce, will sate even the most carnivorous hankerings. Another sports-bar darling is their Sizzling Tapa (P200) made from sirloin cut beef. Every juicy bite oozes a peppery flavor tempered by the accompanying vinegar dipping sauce.

Cable Car’s best-kept secret, though-known only to bar regulars-is the Shrimp Scampi Pizza (medium P620, large P720). It’s the cheese-y choice of those in the know because of its cream based crust, showered with shrimp and a mountain of mozzarella. End the evening with the signature drink, Furo Locco (P215). Not for the faint of heart, it it has a combination of 14 different liquors that will surely make you go loco.

Cable Car Checkitout Beerpong Bar Arnaiz Retro
Your Guide to Thriving in This Strange New World
Staying
In? What to watch, what to eat, and where to shop from home
OR
Heading
Out? What you need to know to stay safe when heading out