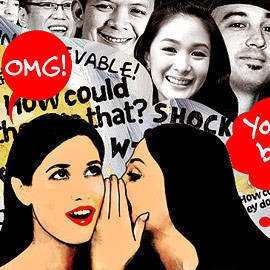 Take a bite out of our gossip sampler. 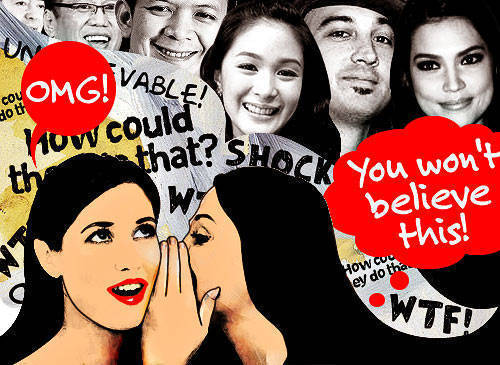 (SPOT.ph) These mostly-unconfirmed buzz points may not have made it to the front page of newspapers and websites, but, heck, people are talking about them. Here’s what we dug up this week.

The heart of the matter. In 2011, it was reported that Senator Chiz Escudero, 42, had separated from his wife of 10 years, Christine Elizabeth "Tintin" Flores. This year, Escudero has to fend off rumors that he is dating actress Heart Evengelista, 27, who just broke up with Brazilian-Japanese model Daniel Matsunaga earlier  this year. In an ABS-CBNNews.com report, Evangelista admitted that she had gone out to dinner with Escudero twice. She also revealed that it was Senator Miriam Defensor Santiago who introduced her to Escudero. Frankly, the only surprising thing is the fact that Santiago is practically Evangelista’s BFF now. How did that happen?

Radio reloaded. The website of the defunct NU 107 indicates that the radio station is going to make a comeback this year. The teaser says it’s "redesigned, redefined." We hope that’s a good thing. Moreover, we hope it’s for real. Some sources say it’s merely the work of a wishful hacker.

P-Noy’s new date. Rumor has it that President Noynoy Aquino was spotted with a "fair-skinned and pretty" lady at a "steakhouse in Bonifacio Global City" on the evening of May 31. If you Google the phrase, "Bonifacio High Street Central steakhouse," one of the top results is this: New Orleans Bourbon Street Steaks & Oysters. The only other steak place around the same area is Duo Steakhouse & Wine Bar. Anyway, this mystery date is the eighth woman (not counting Shalani Soledad and the unnamed Singapore-based reporter) that Aquino has been linked to since he was proclaimed president. Count ’em:  Barbie Palagos, Liz Uy, Len Lopez, Bunny Calica, Trish Roque, Karen Villanueva, and Grace Lee. The press won’t stop speculating if today’s mystery date could be tomorrow’s First Lady. However, with P-Noy just a few years away from claiming his senior citizen’s card, we doubt if he’ll ever get hitched. But that doesn’t stop him from dating women who are young enough to be his daughters. In fact, rumor also has it that this mystery date of his could either be a "29-year-old banker" or a "third-year collage student." No wonder he needs to eat steak.

Unconfirmed couplings. Manila Bulletin Online points out that there have been multiple reports of John Lloyd Cruz sightings in Angelica Panganiban’s condominium even if they’ve both dismissed the speculations that thay’re an item. Meanwhile, as PEP.ph documents, Rhian Ramos and KC Montero have also been hounded by hook-up rumors. Of course, they’ll all say that they’re "just friends." We know the drill.

Land lowdown. Ramon "RJ" Jacinto may still be playing rock ’n roll music but he’s got a headache when it comes to his sister, Marilyn Jacinto (the first wife of the late Rep. Iggy Arroyo). According to Manila Standard Today: "RJ filed charges against his sister, Marilyn, for spurious public documents and falsifying public documents. This was because RJ, the president of Oregon Land Inc., a family corporation listed as the owner of a ₱300-million property in Novaliches, Quezon City that Marilyn allegedly sold to herself for ₱14.6 million when she was managing the corporation and without the approval of its directors and stockholders." Marilyn allegedly used "a fake deed of absolute sale" to finalize the sale.  You think that’s it? Think again. Another sibling, Fernando Jacinto Jr., "sought to have the absolute sale of the disputed property between Marilyn and their brother Jose Maria Jacinto nullified." Ahhhh, rich people and their problems.

SPOT.ph’s Allegedy welcomes information that would confirm or refute any of the featured buzz points.

Noynoy Aquino Heartevangelista Kcmontero Rhianramos Rjjacinto
Your Guide to Thriving in This Strange New World
Staying
In? What to watch, what to eat, and where to shop from home
OR
Heading
Out? What you need to know to stay safe when heading out