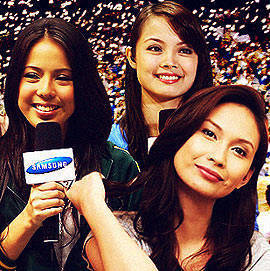 On and off the court, these girls know how to deliver.

(SPOT.ph) Another year, another UAAP season. But before we get into old rivalries, new players, new arenas and the good old games, we thought we'd kick off the season our list of the hottest UAAP courtside reporters so far. There's just something wonderfully distracting about a courtside reporter that makes you stare more intensely at your TV screen. Not only do these guys and gals have the inside scoop on all the UAAP teams, they look good doing it. Not an easy task, considering there's a whole game going on behind them and over a thousand people yelling, screaming and cheering the entire time. Here's our list of knockout female courtside reporters over the years. 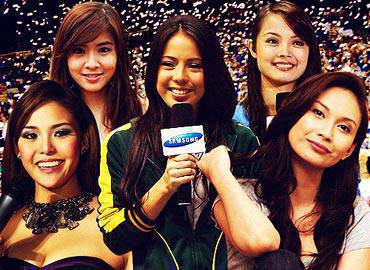 Our Hall of Fame of UAAP’s prettiest. Click the next page for more.

Pia Arcangel is credited as the first ever courtside reporter for the Ateneo Blue Eagles when the games were first aired on Studio 23 in 2002. Being the girl on the inside, Pia was a breath of fresh air to viewers of the games, reporting right from the dugout. These days, Pia is one of the hottest women in news, a co-anchor with Raffy Tima on GMA News TV and 24 Oras Weekend with Jiggy Manicad. She's also a mainstay on Unang Hirit and the host of the kids' show Art Angel on GMA 7.

Here's something you might not know about courtside reporters-they don't necessarily come from the school they represent. Tracy, for example, is a graduate of Assumption College, but went on to become the courtside reporter for the UE Red Warriors for two seasons. She's juggled courtside reporting alongside a stint as a DJ on Jam 88.3. No doubt that Tracy's got the looks and the skill to stay on our radar. This girl can light up an entire room with just her fresh face, more so when she smiles.   Nowadays you can catch her on The Wakeup Show on Mellow 94.7.

Do we really have to tell you why Andi9 is on this list? Possibly one of the most popular products of the UAAP Courtside reporters, we would be remiss not to include her. Andi was the courtside reporter for the FEU Tamaraws for Season 70, and we couldn’t keep our eyes off that girl’s flawless face and those big brown eyes. Hailing from the same gene pools as Lucky Manzano and Gary V, she's had quite the career since her courtside reporting days, as she was an MTV VJ and one third of the DJ trio in Good Times with Mo. Nowadays, you can find her hanging out with fellow former courtside reporter Jessica Mendoza on Magic 89.9.

In the wake of DLSU's historic suspension from the UAAP the season before, Sharon Yu stepped in as their courtside reporter for their comeback year. Possibly one of the De La Salle Green Archers' favorite reporters, this pretty princess is ready to take over the world. Aside from looks, Sharon's got brains too-she has her own advertising business and we hear she’s just recently signed on with Viva Entertainment. We for one can’t wait to see her sparkling charm on the big screens.

A self-confessed bibliophile, Jessica admits that entering the hardcourt as the courtside reporter for the Ateneo Blue Eagles in Season 73 wasn't easy. But with her girl-next-door looks and love of lightsabers, Jessica won her way to the hearts of fans and spectators alike. Now that her stint with the UAAP is but a tender memory, Jessica is living every girl's dream. She's brought the PBA to life as a rookie courtside reporter under TV5's AKTV. You can also catch her on the airwaves with Andi Manzano on Magic 89.9.

As a star of ATBP and a two time FAMAS Best Child Actress nominee, Trish Roque was no stranger to the spotlight. When she first signed on as the courtside reporter for the UP Fighting Maroons in Season 71, all eyes were on her as she gave the fans reports live from the dugout. Recently, she was even linked with PNoy and is one of the rumored reasons for the president's breakup with then-girlfriend Shalani Soledad. Now setting aside her acting chops and presidential scandals for more serious journalism, Trish is currently working the Quezon City beat for TV5 as a news reporter. Check out this clip of her on the hardcourt:

Arguably one of the most popular female sportscasters in the Philippines, Lia Cruz first stepped into the scene as the courtside reporter for the Ateneo Blue Eagles from 2005-2006. Petite and pretty, Lia’s best asset is definitley that gorgeous smile (and those apple cheeks). After graduating AB Communications in Ateneo, Lia went on to become a sportscaster for the PBA and a host for BTV under Solar Sports. She also worked with Candy Magazine for a while. Add that to more sports TV stints, experience as a DJ and now a hosting gig at TV5's Sapul sa Singko, how could we not have the hots for this hardcourt hottie?

Is there anything that Tina Marasigan can't do? She's a psychology graduate, a finalist in the Ford Supermodel of the World competition and a former Bb. Pilipinas contestant. Oh, and did we mention that she's also working at DZMM Teleradyo? As the courtside reporter for the UST Growling Tigers in Season 74, the model and beauty queen sizzled on screen with an energetic reporting style, killer looks and her modelesque physique. Although she was criticized for already being an alumna of UST while reporting, Tina's proven that she's the right girl for the job. She certainly fits the tiger print bodysuit well.

She was the courtside reporter for the Ateneo Blue Eagles in 2002 when the Eagles got their fairytale championship season, their first win since 1989. With the same likeable charm, infectious smile and a shining personality she displayed on court, Patty won MTV VJ hunt in 2003 and has since been one of the fan favorites. Now a blogger, a host, a model, a teacher and a one time actress, Patty is one of those personalities who has got that star quality. She's got a big heart too, as she filmed a commercial against Child and Forced Labor for the International Labor Organization.

As the only courtside reporter that participated for three seasons instead of the allowed two, Gretchen Fullido was an unstoppable force in front of the cameras as she reported for the University of the Philippines from 2004 to 2006. With her big personality and even bigger assets, she knew how to whip the fans into a frenzy during games. On top of that, she's a swimmer too!  Nowadays, Gretchen's doing pretty well for herself as the showbiz reporter for TV Patrol World, as well as having several TV shows with Studio 23, ABS-CBN and DZMM. Fans also report that they saw her doing the weather once for ANC. We're seeing nothing but hot, hot, hot days and sunny skies for this one.