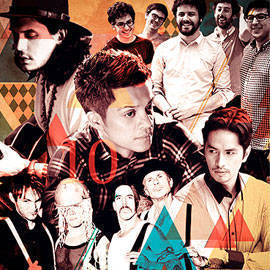 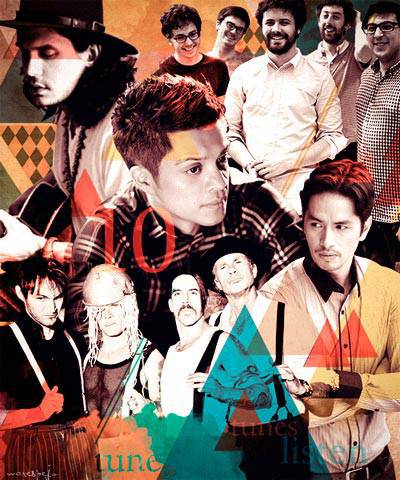 John Mayer’s "Queen of California" is another simple and stripped-down single off his new album, Born and Raised. The bluesy song sets off with a gentle acoustic and progresses into a sweet mix of light vocals, pianos, and more guitars.

Fun fact: The cutesy lyric video was created using Draw Something by Brainbow Inc., a print and motion graphics team, and was posted by John Mayer on his Tumblr account  on June 26.

Bamboo’s latest single is easy to love. It’s clean and simple, contemplative and every bit OPM. The slow tempo and lyrical composition will convince you that the single is worth listening from start to finish.

Fun fact: On his Facebook page, Bamboo posted about the single's music video: "The video reminded me of times when I would simply walk for hours...with nowhere to go....no destination...just to clear the cobwebs...to get out and just think...slow things down...sorta miss those days.."

Fun fact: It was in 1983, according to Rolling Stone, when RHCP’s Anthony Kiedis and Flea scored an opening gig through Mullen after making the club owner listen to their demo.

Rico Blanco’s "Amats" exudes a dark and eerie mood that will surprise you. Feel the danger in the track’s haunting pianos, deep vocals, screeching synths, and tribal drums.

Fun fact: The single "Amats" was released on iTunes worldwide last June 12, in time for Philippine Independence Day. The album GalactikFiestamatik, wherein the single is included, is set to come out in CD and digital formats this July.

"I’ll be Alright" opens with a blast of high-speed synths, samples, and drums. Frontman Michael Angelakos’ falsetto gives life to the lyrics that are all about breaking up-hidden behind the track’s pumping and cheery melodies.

Ciudad is welcoming July with the release of their fifth studio album, Follow the Leader. The clean and dreamy single will make you anticipate what the rest of their latest record has to offer.

Fun fact: Ciudad started in 1994 and released their debut album titled Hello! How Are You, Mico the Happy Bear? in 2000.

Matchbox Twenty’s new single off their latest album, North, is reminiscent of their ’90s sound. There are no surprising elements here, but it's catchy enough to get your attention and keep it.

Fun fact: North, Matchbox Twenty’s first album in 10 years, is set to come out in September. Billboard has the complete tracklist.

Master guitarist and entrepreneur RJ Jacinto teams up with none other than Ely Buendia in this funky ditty. Listen to smooth guitars accompanied by slick sax in this refreshing OPM offering.

Artist: Minus the Bear

Playful guitars and fully-charged electronics make this dance-y rock tune from American indie band, Minus the Bear. Lyrics centering on loneliness and springing from depression are masked by the track's pumped mood.

Fun fact: Their forthcoming album, Infinity Overhead, is set for release in August.

Rocksteddy’s latest offering is a solid rock ballad with extra-sentimental lyrics and an LSS-inducing chorus.