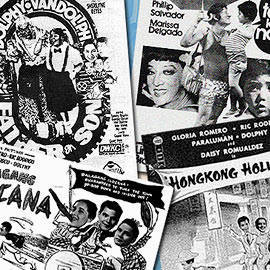 Spot.ph blogger Ria Limjap looks back fondly on the King of Comedy’s monumental body of work.

(SPOT.ph) This is my earliest memory of a Filipino movie. A young Gloria Romero plays Biday in a Sampaguita Pictures production from 1954. Ric Rodrigo is the love struck swain Ernesto.

For as long as I can remember, I’ve watched Dolphy play the comic relief, the third wheel, the stealer of every scene. I was eight years old, a fat kid home from school, watching Tagalog movies like Dalagang Ilocana after lunch on Channel 9. I loved the Gloria Romero-Ric Rodrigo love team, especially when Dolphy was cast as the sidekick: his antics were the perfect foil for the slightly corny and very period ligawan portion. His presence in a movie made it a real romantic comedy, equal amounts kilig and hilarious. In 1957’s Hong Kong Holiday, another Gloria Romero/ Ric Rodrigo romance, Dolphy’s performance was the best thing on screen (except perhaps for Gloria Romero, prefiguring the great Maggie Cheung, in a tight cheong sam and winged eyeliner.) It was Dolphy who brought a vaudevillian energy to motion pictures with his lightness of foot and lightness of heart. He was a joy to watch:

A scene from Hong Kong Holiday

Born in Tondo in 1928, Dolphy’s own career ran parallel to the budding entertainment business put in place by the Americans from the turn of the century. When he was young, bodabil was in vogue; he watched stage shows and got into movies for free as a snack vendor. He got into the business as a dancer, his trademark kenkoy grace which would later translate well in his physicality and great timing as a comedian. By the 1940s Dolphy was on the radio, entertaining the public with Panchito Alba. Best friends in real life, as comedy partners were perfect for each other: Fat and Thin, Tisoy and Chinito, Big Nose and Small Eyes. The partnership spawned over fifty movies and lasted several decades. Over the 50s and 60s, Dolphy was making several movies a year, more hits than misses in that golden age. The Dolphy I remember is from the 1950s: the Sampaguita comedies where nothing really bad ever happened and everything always ended happily. He made over a hundred movies in this entire career. I spent many afternoons watching Dolphy’s old movies on television. Even on evening primetime television, I watched John En Marsha, his long-running sitcom with the late Nida Blanca. Dolphy played a family man whose rich mother-in-law liked to rub it in. (To this day, I still think Doña Deliliah [Dely Atay-atayan] and her maid Matutina are brilliant comedic characters.)

A scene from John En Marsha

Dolphy, of course, was the best comedian of all. He was always good in tandem with other actors, but also he was great just as himself, distinct and irreplaceable.

That clip from the 1995 Dolphy/Vandolph starrer Father and Son (directed and produced by Dolphy)-which came way before Bill Murray’s "Santori" time from Lost in Translation-is a great piece of classic Pinoy humor. He was so clever with portraying the Filipino’s foibles to an audience that loves to laugh at itself.

But the truth is I love Dolphy the most when he’s gay.

Who can forget the first appearance of Dolphy as Facifica Falayfay sashaying down the stairs in a bikini and a transparent raincoat? What a successful cross-dresser he was, and I’ve never seen another Filipino actor do it so well. (By the way, I think Elizabeth Hurley would look good in his first outfit in the clip.)

But it was Lino Brocka’s Ang Tatay Kong Nanay which left me in tears-seriously ugly crying. This brilliant melodrama, directed by Lino Brocka and written by Orlando Nadres, features strong performances and a heartrending story-and a great opening sequence with the best sward-speak EVER. It is my utter favorite.

They are flying flags at half mast over Manila because the King of Comedy is dead.

Try to watch one Dolphy movie if you can to honor the memory of a man who never tired of entertaining us all our lives-and always gave his best performance.