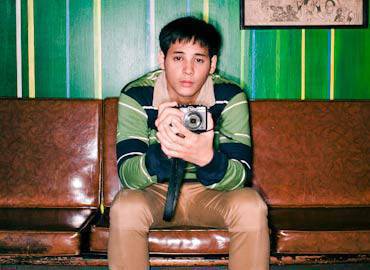 Ang Nawawala: Looking at What Isn’t There

The first in our Cinemalaya review series, SPOT.ph blogger Ria Limjap takes a look at the indie-music-meets-family-drama flick.

The film Ang Nawawala subverts the wisdom from Saint-Exupéry’s The Little Prince: "what is essential is invisible to the eye". Marie Jamora’s debut feature, obviously made by hearts that see, makes visible what is essential.

The trailer for "Ang Nawawala"

On the surface, Ang Nawawala is a family drama set amidst the cushy confines of the upper crust: this is the world of the driver-driven, where everyone speaks in either straight English or straight Filipino, and uniformed housemaids prepare rooftop parties for their employers who collect cameras and vinyl records. This is the world that Gibson Bonifacio (Dominic Roco) comes home to. He doesn’t speak a word to his family: not to his distant and beautiful mother Esme (Dawn Zulueta), not to his nice bow-tie wearing dad (Buboy Garovillo), nor to his big sister Corey (Jenny Jamora) or his little sister Promise (Sabrina Man). He only really talks to his dead twin Jamie (Felix Roco), who died in a tragic accident when they were kids. Despite his self imposed silence, Gibson meets Enid (Annicka Dolonius) and finds himself falling in love with her. How can he not? She’s funny and cool, drinks beer and wears boots. (I’m sure half the boys at Cinemalaya are pining away for Annicka Dolonius, who is perfectly cast in this role. She’s delicate and wry, edgier than Zooey Deschanel and cute in a Japanese doll kind of way.) It’s Enid who draws Gibson out of his shy and non-speaking ways. Anyway, they don’t need words for listening to records and making out. When Gibson finally speaks, his first words are for Enid.

Dominic Roco is a revelation as the damaged boy, the left behind twin, compelling without having to say anything. All we need is that limpid gaze, uncannily like his father Bembol’s doomed character Julio in Maynila sa mga Kuko ng Liwanag. The rest of the cast is pitch-perfect, too, and I think this is Dawn Zulueta’s best work ever.

Ang Nawawala succeeds because it is heartfelt but never cheesy, consistent in tone and atmosphere from start to finish. The screenplay, co-written by Ramon De Veyra, is poignant in just the right amounts and funny without being forced. Trinka Lat’s production design work is so charming and detailed and evocative of Gibson’s world and is a great example of how production design influences story and character.

This film captures so clearly the subtle and fleeting moments in life that break our hearts and set us free. It’s heartfelt and stylish, and unabashedly the zeitgeist film for the members of this post-punk, post-slacker, post-everything generation who suffer-like all of us-the irony, the heartbreak, the long process of growing up and letting go.

For cool stuff about the film, check out http://angnawawala.tumblr.com/

Catch Ang Nawawala at Cinemalaya 2012 at the CCP, Greenbelt, and Trinoma. Screening schedules are here: http://www.cinemalaya.org/schedules_calendar.htm