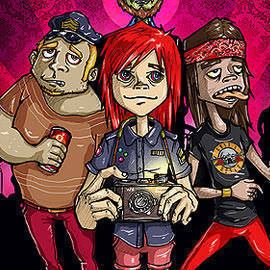 They might be next to you. You’ve been warned. 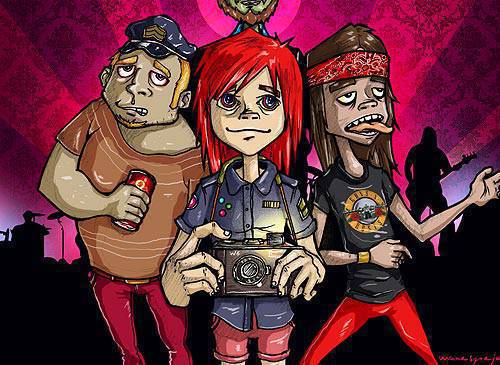 (SPOT.ph) When the artist delivers a mind-blowing performance, a concert can be exhilarating. But just like the movie theater, there can be some audience members who can and will rob you of your money's worth. Foreign acts have been flooding into Manila, as fast as actual floods are drowning our city's streets. There was the infamous Lady Gaga concert in May, Megadeth in July, the Smashing Pumpkins last night, Snow Patrol tonight, and Tears for Fears on Friday. To get you concert-savvy, here’s a list of some of the most annoying stereotypes you could and will likely bump into mid-head bang at a concert. Get informed, or prepare to get irritated.

Their bond is so strong that even though there are two of them, their undying love accounts for one. They suck face all throughout, not even minding the explosive musical performance happening right in front of them. Yes, playing tonsil hockey is fun, but if people wanted to watch torrid kissing and/or the constant exchange of saliva, they would've stayed home and watched The Bachelor instead. It might be the soundtrack to your romance but please get out of this concert and take your lip-locking elsewhere. Better yet, get a room.

He stands awkwardly beside his buds, pretending to mouth the words to each and every song-even if he really just knows two of them. Scratch that, one of them. As the rest of his friend s get ecstatic as the set moves on, he becomes tired of pretending...to give a shit. He sips his beer, hoping for the concert to be over, so he can Google lyrics and random band trivia, an act of absolution come post-concert chitchat.

Unlike the poser, this guy knows his stuff...all too well. So much so that he takes over the vocalists’ job, crooning in your ear as he holds up his homemade arts and crafts sign with pandering glee. As if the band shirt is not enough to clue everyone in on his humiliating idolatry, a scream here and there of "I LOVE YOU" gets thrown in between sets. Okay. We get it already. You're a fan.

Everyone is a photographer nowadays and concerts are a breeding ground for fanarazzis; they who have taken it upon themselves to document this pivotal moment in their concert-going career at the expense of your viewing and listening pleasure. DSLRs in your face, blinding flashes, and the occasional I'll-take a picture-of-myself-with-the-band-performing-in-the-background for the Instagram community to enjoy is forgivable. But you'd think they'd rather experience the concert than looking at it through a lens.

Diddling your mobile when you're supposed to be succumbing to aural pleasure means you probably don't want to be there in the first place. If they aren't annoyingly talking to someone about how their day went (it's free to talk outside you know), he or she is most likely on 3G or abusing the venue's WiFi privileges so he can tweet what's going on each minute. "Tears for Fears just got on stage" or "Billy Corgan sounds like he did in the 90s" will most likely be flooding walls of jealous Facebook users. Go ahead, rub in their too-cheap-to-attend-for-ourselves selves how awesome the show was. #EveryoneSecretlyHatesYou

Though mostly present during rock-and-roll outings of the heavy metal persuasion, these rebels without a cause run amok in the concert scene. There you are, trying your best to enjoy the event without having to revisit your pseudo-rocker dark days (because, you know, you're so too old for that) when a younger, all too familiar version of yourself starts pushing others around yelling, "Circle pit!" Your civilized self tries to resist; only you're already caught in the melee of sweaty angst. You decide to join in. As you make your way home, your body aches from all the air-punching and bruises, and you remember why you don't mosh anymore.

It's okay to be intoxicated at a concert. If a couple of beers will loosen you up and shed your inhibitions then by all means. Being downright plastered is a different story. Reeking of alcohol and dried-up puke is this individual's unforgivable crime. As he hollers "Whooooohoooo" to every chorus and picks a fight with random strangers, the stench of beer-breath fills your nostrils. It will take some time for security to escort this man out of the building. In the meantime, offer him some coffee or cab money for his ride home. He has obviously spent most of his time and cash looking for the next concert ticket at the bottom of the bottle.

You try every neck-jerk and tiptoeing strategy but to no avail. The dude right in front of you is just vertically superior and you start to wonder how long before each warranted "excuse me" turns into a fistfight. Only, yeah, he's much bigger and he isn't budging. Sooner or later you'll be so sick of his nape that you'll have to resign yourself to simply listening. Ah, a concert experience that is just like listening on your iPod. Money well spent.

"Why is it so hot?" or "Ang sikip naman dito!" are some of the statements uttered by the whiner. In an attempt to dispel the fact that they've got a personality problem, they project their issues on their surroundings. Irritated by every minute detail-from the air-conditioning to the seating capacity-you see the individual's friends feigning their disapproval while trying to hide their should-have-left-this-bitch-at-home face. And you thought concerts were supposed to be fun.

1. The one who didn’t shower

The encore is up. The show was outstanding and the band is about to blow out one of their greatest hits. They ask you to raise your lighters in the air and sing along. And as you do so, you start to get a whiff of a neighboring fan's sweat-stained armpits. Yeah man, we know it is rock and roll, but grunge is dead, and even Kurt Cobain gave his body a once over with a bar of soap before heading out.

Concert Goers Concerts Mostannoying
Your Guide to Thriving in This Strange New World
Staying
In? What to watch, what to eat, and where to shop from home
OR
Heading
Out? What you need to know to stay safe when heading out