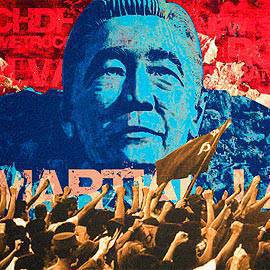 Consider this a "wordy crib sheet" from the tumultuous era. 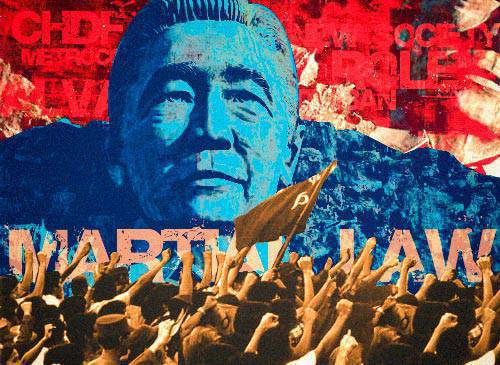 (SPOT.ph) Martial Law’s impact on Philippine history and pop culture was significant, to say the least. Back then, there were acronyms and buzzwords galore for the state’s programs and tools of propaganda. Admittedly, some acronyms made people fearful, while others attempted to convince them into thinking that this was all "for our own good." Still, there are acronyms and buzzwords that were spawned by what people saw-some of them gave hope (or whatever passed for it), while others only emphasized the gap between those in power and those who had been rendered powerless. Here, we’ve listed some of the words of that tumultuous era.

Blue Ladies. This group is defined by blogger Hecho Ayer as "a select group of ladies acting as if they were First Lady Imelda Marcos’ ladies-in-waiting." It’s worth noting that the said ladies were members of high society.

CHDF. The Civilian Home Defense Force, a group of non-professional citizen reservists organized during Martial Law and designated in rural areas to supposedly help in the government’s fight against insurgents. (Weaponized civilians? You can guess what happened.)

FQS. First Quarter Storm refers to January to March 1970, when demonstrations, protests, and marches against the Marcos government intensified. It was later cited by Nick Joaquin in his book Manila, My Manila: A History For The Young (as well as in other works) as "one of the factors leading to the declaration of Martial Law in 1972."

Golden Kuhol. According to a GMA News Online article, this type of snail was introduced in the early ’80s by the Marcos government supposedly "to augment the protein needs of the population." Unfortunately, the snails multiplied rapidly and became ricefield pests. The GMA News Online article pointed out that in 2000, when Bongbong Marcos became the governor of Ilocos Norte, he "allotted P2 million to unleash an army of ducks in his province to control the pests that his father had brought to the country."

KKK. No, this did not refer to the group founded by Andress Bonifacio. This was the Kilusang Kabuhayan at Kaunlaran, one of the economic reform programs of the era.

KM. Kabataang Makabayan, one of the "radical" student organizations of the era.

Masagana 99. According to a GMA News Online article, this was "the Philippine version of the international movement Green Revolution, a campaign for food self-sufficiency." This was launched in May 1973.  The GMA News Online article also noted: "However, Katherine Ellison wrote in Imelda: Steel Butterfly of the Philippines [that] some Filipinos ’angrily noted the source of the Green Revolution’s funds: two million pesos from the sale of Japanese rice donated to typhoon victims, and five million from the Department of Agriculture.’"

Metrocom. The Philippine Constabulary (PC) Metropolitan Command. The task of the group’s members was to "complement and supplement police forces within the Greater Manila Area." Those who lived through the Martial Law era often say that the Metrocom "ruled Manila back then." They were the guys who enforced the curfew and made sure that nobody "disturbed the peace," so to speak.

National Thanksgiving Day. As historian Ambeth Ocampo wrote in his Philippine Daily Inquirer opinion piece, this was supposed to refer to September 21, the so-called official date of the declaration of Martial Law. President Ferdinand E. Marcos declared it in 1972 so by virtue of Proclamation No. 1180.

New Society. The brave new world envisioned by President Ferdinand Marcos. He said that Martial Law was the the prelude to this environment, where social and political values would be elevated. As such, Marcos’ political party was called Kilusang Bagong Lipunan.

Nutribun. According to a GMA News Online article, this bread was "developed in the early ’70s by local bakeries from a blend of local and donated ingredients, and distributed in elementary school feeding programs as a ready-to-eat complete meal." The GMA News Online article noted that in her book, My 17 Years With USAID: The Good and the Bad, Nancy Dammann claimed: "During the disastrous floods in Central Luzon of 1972, bags filled with Nutribuns were stamped ’Courtesy Imelda Marcos-Tulungan project’ even though they were donations."

Oplan Sagittarius. The supposed plan to implement Martial Law. This plan was exposed in Congress by then-Senator Ninoy Aquino earlier in September 1972. His pronoucements turned out to be true.

PC. The Philippine Constabulary. This government agency is described by history books as "one of the first of the four service commands of the country’s Armed Forces." In other words, you didn’t want the PC knocking at your door back then.

"Sa ikauunlad ng bayan, disiplina ang kailangan." The Martial Law slogan. It means, "For the nation’s progress, discipline is needed." There used to be an anecdote alleging that TV host Ariel Ureta made a joke about the slogan, turning it into "Sa ikauunlad ng bayan, bisikleta ang kailangan (For the nation’s progress, a bicycle is needed)." The story goes that he was "invited" to Camp Crame and was made to ride a bicycle for hours. Ureta, in a recent interview published in The Philippine Star, said that this never happened. Many people still believe the story though.

Salvage. This word meant something entirely different. But, in Philippine English, it referred to extrajudicial killings. This was what allegedly happened to "enemies of the state." You say something bad about the government and shortly after that your body is found in a ditch somewhere.

SDK. Samahang Demokratikong Kabataan, one of the student groups tagged as "radical" during the era.

Art by Warren Espejo, with screenshot of photo from ArkibongBayan.org.