Jetplane Joyride: SPOT.ph Takes the Airbus A320 Sim for a Spin
Loading
Already a member? Log in
No account yet? Create Account
Spot.ph is your one-stop urban lifestyle guide to the best of Manila. 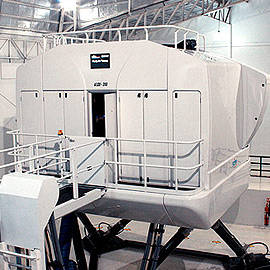 Jetplane Joyride: SPOT.ph Takes the Airbus A320 Sim for a Spin

The team earns its wings. Or not. 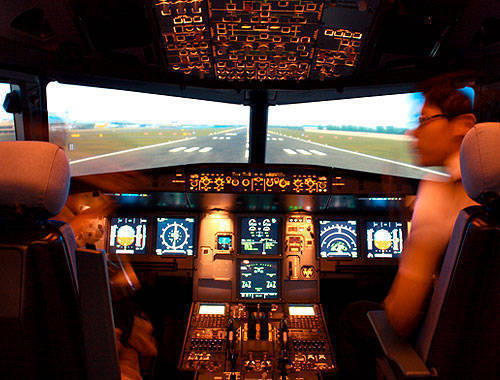 "This is your Captain speaking..."

(SPOT.ph) Cutting a wide circle over Manila, our radar display indicated the NAIA runway somewhere to our right. We adjusted our heading by twisting a dial on the navigation panel, and our plane-an Airbus A320-quickly obliged, dipping its wings starboard until we saw a wide open stretch of sea open up just below our plane.

"That’s Laguna de Bay," our instructor said. He pointed out a couple of other locales, before indicating a far-off strip of black asphalt. "And that’s NAIA. If it were night time, you’d see the runway lights there. It’s really quite beautiful."

"We could land on autopilot, but I want you to experience landing for yourself," he continued. The plane lined itself up with the runway and began dropping altitude. "Now," our instructor said to Captain-and Spot.ph staff writer-Sasha Lim Uy, "grab the joystick, and click the red button with your thumb twice to disengage autopilot."

There was an audible beep as the plane’s brains relinquished control to the captain’s hands. The first officer-a reporter from the Inquirer-put flaps down. "You see the cross over there?" Our instructor tapped Captain Sasha’s primary flight display. "Keep adjusting the joystick so that you’re always lined up with that cross."

Everyone who’s ever flown in a plane knows that familiar shudder as the plane starts to land. It seemed even stronger now that we were actually inside a cockpit. On our windshield, the tarmac grew larger and larger, and then, the final bump. A high-pitched screaming filled our ears as the tires caught tarmac and Captain Sasha pulled back on the throttle. Even though we knew everything was fake-that the view outside the cockpit was all computer-generated imagery, that the shuddering was all artificial, the sounds were merely sound effects, that the "danger" was all in our heads-the heartfelt relief at landing was 100% genuine. 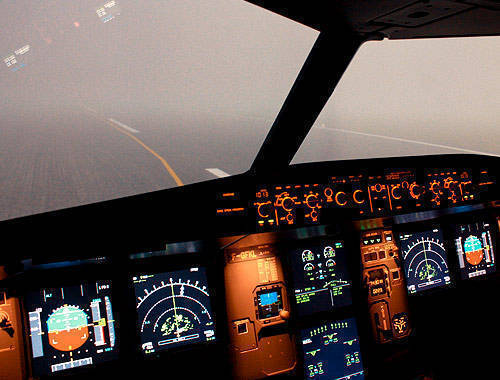 Touchdown at "foggy NAIA." Both Captain and First Officer have two screens side-by-side in front of them, the radar and the primary flight display

With a machine like this, you’d better believe everything feels real. Modeled with actual A320 parts and shipped straight from the Netherlands’ SIM Industries, the flight simulator is mounted on hydraulic-powered exterior struts that mimic every pitch and roll. Meanwhile, the software comes pre-loaded with the entire world map, and even the airports are modeled exactly after their real-life counterparts.

While the graphical fidelity is more Google Maps than Xbox 360, the scale of its rendering is stunning. As we parked on the NAIA runway, we could make out Antipolo’s slopes on the horizon; while flying around Hong Kong, our wings nearly brushed against the side of the looming, 118-story International Commerce Center.

From his instructor’s seat in the back, our teacher for the day, Captain Romeo Layug, could play God. With a tap on the touchscreen, he could turn the view outside instantly from day to night, summon thick clouds to limit visibility, or call on, Thor-like, the power of lightning and thunder. He can also jack up turbulence from light to very, very heavy, and with more taps on the screen, he can shut down your engines, displays, avionics, and generally malfunction your plane. He can even simulate an electrical fire, with smoke pouring into the cockpit.

But when he’s flying, he prefers to just play around. "We call it fidelity testing," he says. "The craziest thing I did on this was to go to Seoul and land the plane on a bridge."

All that hardware comes with a high-end price-tag: to the tune of 11 million dollars, in fact. "This is my biggest gamble," says Ramon Guico III laughingly. He owns the WCC Aeronautical and Technological College, which operates the flight simulator. He’s also a licensed pilot, and a town mayor as well, of Binalonan, Pangasinan, where the WCC is based. The flight sim, based out of the WCC branch in Manila, is his biggest investment...but one that could pay off big.

You see, while we were able to test the flight sim thanks to the good graces of Captain Guico, it’s actually not open to the public. Rather, the ones who’ll be spending the most time here will be professional pilots in recurrency training, or refresher courses that test how well you handle the Airbus in emergencies. With airlines like PAL and Cebu Pacific buying Airbuses in ongoing modernization and expansion programs, the demand for pilots will rise exponentially over the next 50 years, and the WCC is poised to educate, train, and retrain this next generation of flyboys.

"Instead of going abroad and spending so much for the training, [they] have the convenience [of training] here, right smack in the heart of Manila," says Guico. But the WCC isn’t just about the skills. "This [plane] is very easy to fly. It’s computerized; it can even land by itself. One of the hallmarks of our school is that we have a character-building program for the pilots. If you watch Air Crash Investigations in National Geographic, there are many accidents and incidents caused by the attitude of the pilot. As we say, ’attitude determines your altitude’." 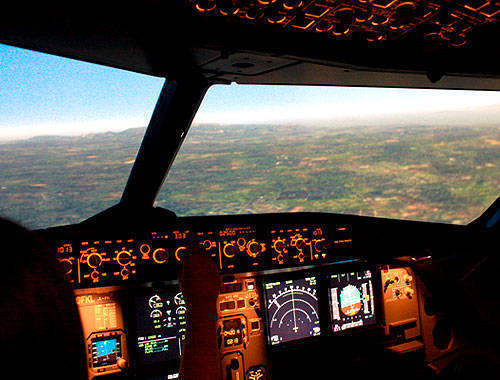 The "view" of Luzon

Skills, though, turned out to be quite important as well. With Captain Sasha already retiring from the fleet, it was my turn to take the captain’s chair, with Spot.ph art director Warren as my first officer. Capt. Layug teleported us to Hong Kong International Airport and gave me the same directions as Captain Sasha. When it was time to take off, though, I managed to successfully drive the plane off the runway, take off almost vertically, and, presumably, kill (or at least piss off) all the passengers on board. While flying close to the Hong Kong skyline, Capt. Layug paused the simulation, and, hovering the ground at 1500 feet, politely turned over the controls to my first officer.

Again: the airplane was fake, but the shame was very, very real.

For information on WCC’s aviation courses, call 912-3333, or visit www.wccaviation.com

Airbus A320 Naia Flightsimulator Flying Pilot
Your Guide to Thriving in This Strange New World
Staying
In? What to watch, what to eat, and where to shop from home
OR
Heading
Out? What you need to know to stay safe when heading out