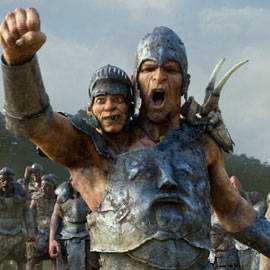 Is this retelling of the classic fairy tale worth watching? SPOT.ph blogger Paul Daza finds out.

(SPOT.ph) As children, farm boy Jack and Princess Isabelle were told bedtime stories about ferocious giants that, according to legend, once terrorized their kingdom. Ten years later, the grown up Jack (Nicholas Hoult) and Isabelle (Eleanor Tomlinson) discover that those "tall" tales are frighteningly true when a giant beanstalk sprouts from underneath his house and whisks her above the clouds to the realm of the man-eating giants. With the help of brave palace guard Elmont (Ewan McGregor), treacherous Lord Roderick (Stanley Tucci), and a clutch of the king's men, Jack must now try to rescue Isabelle from the giants.

The revisions and expansions to the story of Jack & the Beanstalk. Of late, such centuries-old fairy tales as Hansel and Gretel, Little Red Riding Hood and Snow White have been given 21st century movie tweaks, so why not the Jack of beanstalk fame? However, what gives Jack and the Giant Slayer an edge over those other fantasy flicks is that one of its scribes is actually an Academy Award winning screenwriter- Christopher McQuarrie, who won an Oscar for his brilliant screenplay for The Usual Suspects (which was directed by Bryan Singer, director of Jack the Giant Slayer). And so, storywise, we're in very good hands. Among the tasty ingredients that the filmmakers use to beef up their stew are a classic romance between a poor boy and a beautiful princess, the retrieval of a magical object (in this case, a very powerful crown), and a bloody conflict that arises from the actions of not one but two villains who have a total of three heads between them! There are also amusing allusions to the Lord of the Rings trilogy, Disney's Aladdin, Thor and Shrek.

The pairing of Nicholas Hoult and Eleanor Tomlinson. As the farmhand and princess who fall in love while trying to survive attacks from gigantic man-eaters, Hoult and Tomlinson are probably the most attractive actors to grace a cinematic fairy tale since Cary Elwes and Robin Wright galloped off into the sunset in The Princess Bride. And though the love story of Jack and Isabelle isn't as substantial as the one between the Dread Pirate Roberts and Princess Buttercup, the handsome Hoult and the lovely Tomlinson make an alluring pair you won't be able to take your eyes off of.

The casting-against-type of Stanley Tucci and Ian McShane. I last saw Stanley Tucci on the big screen as the comforting interviewer in The Hunger Games and as the goody two-shoes scientist who created Captain America in Captain America. What a treat it is to now see the talented actor do a 180 and play a baddie who's as treacherous as he is funny in Jack the Giant Slayer. His reaction to Isabelle's claim that she doesn't really want to marry him is the film's priceless, comedic gem. Similarly, Ian McShane's villainous turns as the voice of Tai Lung in Kung Fu Panda and as Blackbeard in Pirates of the Caribbean: On Stranger Tides are now offset by his warm and funny turn as the naïve King Brahmwell in Jack, where he gets to deliver the film's most touching line.

The less-than-convincing visual effects. In depicting the giants and the beanstalk- two of the story's key ingredients - the special effects aren't special at all. The digitally-created giants look more like Grendel rejects from the motion capture film Beowulf than the headliners of a major live action movie with a colossal budget. In this post-Gollum era of digital character animation, this type of work just isn't good enough. Just as fake-looking is the beanstalk, which looks like it was made of inorganic materials instead of living cells. Jack the Giant Slayer may well be the first visual effects movie to actually suffer from an IMAX 3D release, the humongous screen magnifying the animation's flaws.

IN BRIEF: Wonderfully cast and inventively scripted, Jack the Giant Slayer is an entertaining revisionist take on the classic fairy tale that gives "reimaginings" a good name. But lackluster visual effects tarnish the movie and prevent it from being a total delight.

Jack The Giant Slayer Stanleytucci Ewanmcgregor Nicholashoult Eleanortomlinson
Your Guide to Thriving in This Strange New World
Staying
In? What to watch, what to eat, and where to shop from home
OR
Heading
Out? What you need to know to stay safe when heading out